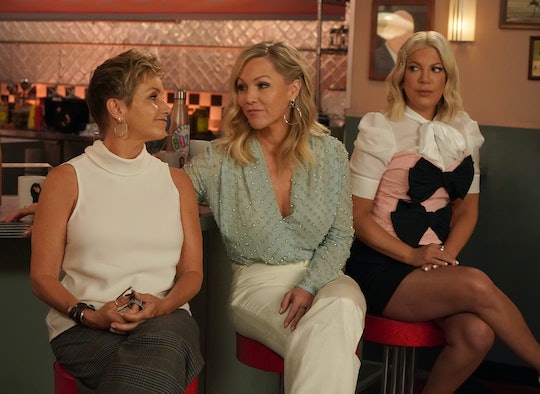 The version of 90210 that returned to Fox wasn't a reboot; it was a show about a reboot, featuring the same actors as heightened versions of themselves signing on for a revival of the series that made them famous. That allows it to poke fun at both the original show and the cast's public image. But was it a one time experiment, or will there be a Season 2 of BH90210?

It doesn't look like Fox has officially renewed or cancelled the series yet, so there's hope that it could be back for another string of episodes some time in the future. The campy comedy didn't explode with popularity like its predecessor, though ScreenRant reported that it had the highest-rated premiere of a summer series on Fox in two years. And even the original Beverly Hills, 90210 needed time to take off with audiences. It premiered in October 1990, but it wasn't until the following summer that its viewership doubled. That was thanks to two key factors: the controversial Season 1 finale (Shannen Doherty's Brenda lost her virginity to Luke Perry's Dylan and didn't feel bad about it, quel choc), and the decision to air Season 2 over the summer.

The original show wasn't an overnight success, so it makes sense that BH90210 isn't either. If Fox chooses to give the followup another chance, its audience could continue to grow, too.

BH90210 is a weird show. But that's what's so great about it. Its concept may be a little hard to grasp at first — everyone is themselves, but also not? Tori Spelling is married with a multitude of kids, only her husband is a different guy? — but once you're on the ride, it's a fun one. The cast has a good sense of humor when it comes to public perception of them; no one seems to mind turning themselves into the butt of the joke. Whether the show is mocking Jason Priestley's directorial outbursts or Shannen Doherty's reputation for troublemaking, everyone is down.

And the chemistry that first launched these actors to icon status is still present. The best scenes in the revival involve everyone sitting around a table together (trying to count up their hundreds of enemies to figure out who's stalking them, or attempting to rewrite a bad script) and giving each other a hard time. They come across like people who really know each other well and enjoy each other's company, because they are. They seem like real friends and it's as fun to watch them squabble as it is to watch them make up.

At least some of the cast members would be on board for a Season 2 of BH90210. "We would love to continue to work together," Spelling said at the TV Critics Association's summer press tour, as reported by Us Weekly. She had an "amazing experience" creating the series, explaining that it was like getting to go back to high school and have a do-over. They had the opportunity to do things differently with all the knowledge they'd gained in the intervening years. Spelling concluded by saying, "We have so many stories to tell that this could keep going season after season, so we hope it does."