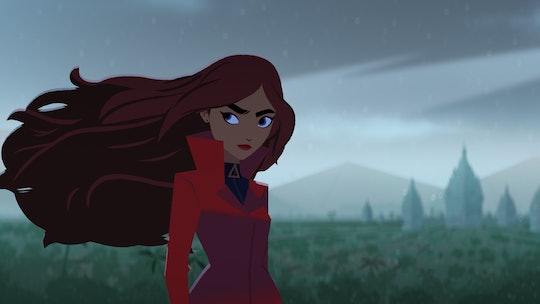 Here's What We Know About 'Carmen Sandiego' Season 2 So Far

As one of the only Latina female characters in early gaming, Carmen Sandiego blazed trails while globe-trotting to nick precious artifacts. So it's no surprise that there was a huge surge of support when Netflix announced it was rebooting the series for the modern age. Fans settling in to marathon the animated series this weekend may be wondering: will there be a Season 2 of Carmen Sandiego? While there's no official word yet on the second season or a release date, there is a very big hint that Season 2 is all but certain.

Carmen Sandiego was ordered for 20 22-minute episodes back in April of 2017, according to Netflix's press release about the series. Netflix dropped the nine episodes that make up Season 1 on Jan. 18. That still leaves 11 episodes that either were made or are in the process of being made which haven't released yet. Presumably, those 11 episodes will make up Season 2 at some point down the line.

Netflix infused a ton of its own star power into the show to draw in adults as well as kids. In a nod to the franchise's origins — Carmen Sandiego was first introduced to the world in a 1985 computer game — Stranger Things' Finn Wolfhard voices an off-screen character named Player, who assists Carmen in her missions. Another high-profile Netflix reboot star, One Day at a Time's Rita Moreno, also joins the series as Cookie Booker, V.I.L.E. Academy's bookkeeper. She originally voiced Carmen in the 1991 PBS game show Where In The World Is Carmen Sandiego?

Carmen, herself, is voiced by a new Latina star for a new generation. Gina Rodriguez landed the coveted voice role in a big win for Netflix in terms of representation. They also have her locked into a live-action Carmen Sandiego film, which will debut on the platform at a later date. (Rodriguez did share an Instagram post wearing Carmen's iconic scarlet hat and trench coat to mark the beginning of filming. But Netflix was quick to clarify that it wasn't her real costume, just an homage to the character.) There are also plans for a new Carmen Sandiego book series which Rodriguez is on board to help launch.

In anticipation for Carmen Sandiego's return to the screen, Netflix launched a project called TheCarmenEffect.com, which tracks the lasting effects of the classic superhero's impact on pop culture over time. Netflix, in partnership with Polygraph, analyzed a dataset of over 350,000 tweets that mentioned Carmen Sandiego in the past five years to determine how she's shaped pop culture.

"For some, it’s manifested as a love of travel, passion for geography, or the occasional urge to buy a red coat," the website states. "For others, Carmen was a first-of-her-kind superhero, showing both girls and boys how to be 'sly, funny and brilliant' as a bad*ss Latina role model." They split her impact into five categories: Sandiego Smarts, Passport Goals, Trailblazer, Signature Style, and Cultural Icon, which visitors can explore on the website.