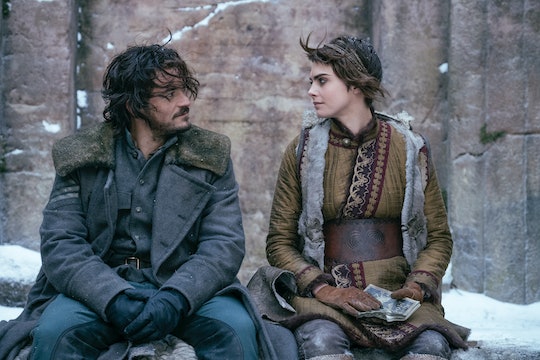 Amazon Prime spits in the face of the question "too soon?" by premiering a period fantasy epic with a super confusing storyline and really ridiculous character names this Labor Day Weekend — just over three months after that other one finally ended. But inevitable Game of Thrones comparisons aside, viewers who dug the opening season of the star-studded Amazon Prime offering may be wondering whether there will be a Season 2 of Carnival Row. The good news is, the series will get a chance to clarify some of its murkier plot points.

On Jul. 27, Variety reported that Amazon Prime had greenlit Carnival Row for a second season — a full five weeks before the first season even premiered. The series spent almost five months in pre-production alone, ahead of its 108-day Season 1 shoot in the Czech Republic. Given the massive expense of the project, to say nothing of casting movie stars like Orlando Bloom and Cara Delevingne, it isn't totally surprising that Amazon would want to give the series a little bit of time to unfold. The inaugural season is just eight episodes long, and, as many reviews note, it's pretty convoluted. As Vanity Fair put it: "It gets to some juicy twists and intriguing reveals in the final episode, but the tension in that finale makes the previous seven hours seem frustratingly flat." So it seems like there's a lot of ground to make up in Season 2.

Carnival Row opens on the improbably named Vignette Stonemoss (Delevigne) arriving in The Burgue — a heavily steampunk-influenced Victorian metropolis — as a refugee. Vignette, or Vinny, as she's called by her friends in the show, is a fairy whose ancestral homeland, the island of Fae, has been occupied by colonizers. Among the soldiers who helped facilitate the invasion is the equally improbably named Rycroft Philostrate (Bloom), who now serves as a police detective in The Burgue. Vinny and Philo (yup, jaunty nicknames abound on this show) strike up a star-crossed romance in the midst of a war, but when she arrives in The Burgue, she believes he's dead.

The fae are but one type of magical refugee seeking asylum in The Burgue. (They tend to congregate in the red light district dubbed "Carnival Row.") Others include centaurs, brutes, and pucks, all of whom occupy a marginalized place in society. They're collectively referred to as "critches" by disapproving humans and frequently work in disenfranchised positions of service.

What brings these many worlds together is a string of murders, which Philo has set out to investigate. Between political tensions, class warfare, and an undisclosed magical creature laying waste to the population, there's a ton for Carnival Row to cram into just eight episodes. Considering how long it took to make the first season from a production standpoint, and the already busy filming schedules of this particular caliber of actor, I'm betting the wait for Season 2 will be a long one. In the meantime, Season 1 of Carnival Row is now streaming on Amazon Prime.