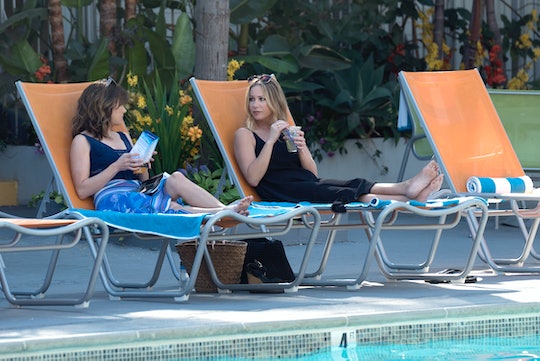 Netflix's new dark comedy, Dead to Me, already has critics and fans alike clamoring for more. Starring Linda Cardellini and Christina Applegate as two widows who form an odd-couple bond that quickly turns a little twisted. So now, of course, fans are wondering will there be a Season 2 of Dead to Me or are you better off flashing the peace sign and moving on? Here's what I know.

As of now, Netflix hasn't officially announced a second season of the new series, but that doesn't mean there won't be one. The powers that be at Netflix HQ will probably want to see what the reception to Season 1 of Dead to Me is like before ordering another ten episodes.

In the past, Netflix has announced second season orders for shows at different times. Some shows are announced right away, some get multiple seasons right away, and sometimes fans have rallied for a show's return as with Lucifer or Arrested Development. Basically, when it comes to the entertainment biz, there are no rules. (At least I don't think so.)

Dead to Me was created by Liz Feldman (2 Broke Girls, One Big Happy), and it boasts an impressive cast — including big name stars like Applegate, Cardellini, Ed Asner, James Marsden, and Brandon Scott. Personally, with that kind of lineup you could get me to watch pretty much anything. So yeah, I'd say I'm pretty excited about this new series.

According to a press release as reported by Deadline, CBS TV Studios head of comedy, Kate Adler described the Dead to Me plot as "a comedic Big Little Lies." Sold. Adler continued by saying,"It was a plot-driven, really dark comedy that was clearly not meant to be on network, it was clearly destined for premium cable, or streaming."

The official description of Dead to Me as written on the Netflix website reads: "A hotheaded widow searching for the hit-and-run driver who mowed down her husband befriends an eccentric optimist who isn't quite what she seems." The two characters are grieving widows with opposing personalities who meet at Friends of Heaven support group. Jen (Applegate), wants to find her husband's hit-and-run murderer and Judy (Cardellini) has a big secret she's hiding. Sounds super juicy! It's the sort of melodrama that would ordinarily be perfect for a Lifetime movie — but it's tempered with an acerbic wit that dark comedy lovers will be totally into. Plus all of this is balanced by the story of two women navigating the grief process. It's pretty true to real life and how people are drawn together in the unlikeliest of circumstances but find a way to prevail — and maybe even laugh again.

Again, it's not known if Dead to Me will get a second season just yet. There are many factors involved. If you want to do your part to help ensure you get more of Jen and Judy's story, stream the episodes, be a total fan girl or boy, then patiently await for the green light.