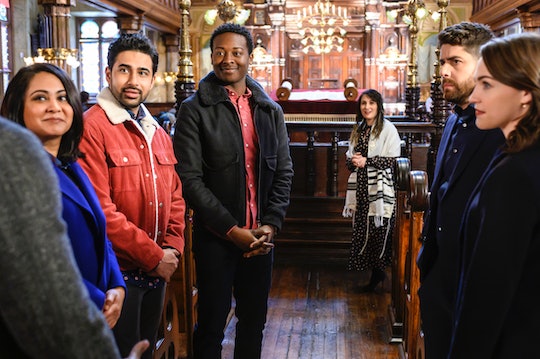 As prime TV season comes to a close, some of your favorite shows are preparing to exit for good or exit for the summer. The waiting for renewal announcements are the worst, and sometimes even the best shows get canceled before having the chance to really shine. So fans want to know if there will be a Season 2 of God Friended Me so they know if they should can fully invest or not.

Well, friends, your prayers have been answered because Deadline reported that God Friended Me has been renewed for Season 2. In addition to other newbs such as FBI, The Neighborhood and Magnum P.I. If you've been holding off on getting to know these characters, this is your permission slip to go for it. Kelly Kahl, President of CBS Entertainment said of the renewal, "We're thrilled with how God Friended Me has performed on Sundays. It's one of the top three new series on television, has improved its time period significantly, and continues a long tradition of prestige dramas for CBS on the night."

It certainly seems to be a fan favorite for its fresh take on the Sunday night sitcom, bringing an added dose of inspiration and positivity. Thom Sherman, Senior Executive Vice President of Programming added in the same press release, "Our amazing cast and producers have done a wonderful job of bringing this series to life each week with humorous and inspirational storylines. Viewers have clearly embraced our characters and the positive message the show delivers."

If you've avoided the show in fear of its cancellation, the official CBS description should give you all the ammo you need to dive in. It said, in summary,God Friended Me is a "humorous, uplifting drama about an outspoken atheist, Miles Finer, whose father is a Reverend and his life is turned upside down when he receives a friend request on social media from God." From that, he "becomes an agent of change in the lives and destinies of others around him." Eventually, Miles accepts the friend request which initially leads to an online journalist with writer's block, Cara Bloom. The two "find themselves investigating God's friend suggestions and inadvertently helping others in need," by use of a "God Account." Along the way, they get the support of Miles's sister, Ali, a "doctoral psych student by day and bartender by night," and his best friend, Rakesh, "a sometime hacker who helps Miles and Cara research the enigmatic account." Though Miles follows the clues in hopes of uncovering, what he thinks is, an elaborate joke he wants to prove wrong, but "in the process, it change his life forever."

Series leading man, Brandon Michael Hall told MediaVillage the part came at a time after he lost his part in The Mayor. "I was disillusioned with the industry," he said. "How does [a network] take an amazing, impactful show and say, 'Now we don't want that?' Kids would come up to me and say, ‘I want to be like you. I want to be a mayor. I have these ambitions. I see myself represented on the screen.’ The Mayor was impactful." Then he landed God Friended Me as if God actually friended him IRL and yes — my mind is blown.

If your TV lineup doesn't include something this inspiring, I suggest you give this show a chance (now that you know it'll be around for another season). The show also stars Violett Beane, Suraj Sharma, Javicia Leslie, and Joe Morton, in case you're taking notes.

With an audience of 10 million viewers — making it the second most watched new series and most watched scripted program airing on Sundays, according to Variety — there must be something worth getting into in God Friended Me. 10 million people can't be wrong, can they?