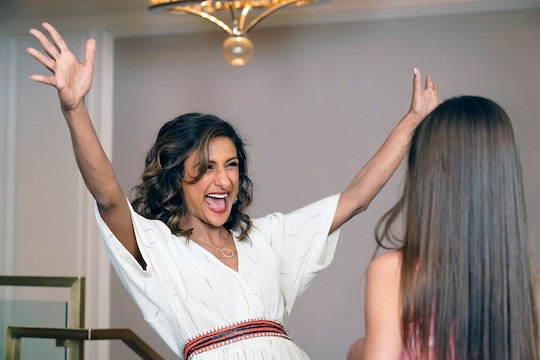 A Season 2 For NBC's ‘I Feel Bad’ Isn't Looking Likely

Thursday nights on NBC have been filled with sitcoms for decades. I Feel Bad joined that classic block this fall with a 13-episode order, alongside popular shows like The Good Place and Will & Grace. Fans of the show are likely itching to know: Will there be a Season 2 of I Feel Bad?

Unfortunately, all signs point to no. According to Entertainment Weekly, NBC announced in November that I Feel Bad “will conclude” in December. Interestingly, NBC did not specifically use the word "cancelled." Instead, the network said that “a decision on [I Feel Bad‘s] future will be determined at a later date,” EW noted. This does technically leave room for the show to get renewed should NBC change its mind. However, a Season 2 does seem unlikely considering I Feel Bad's first season ratings. According to the website TV Series finale, Season 1 averaged 2.571 million viewers per episode, and the most recent episode, which aired on Dec. 13, brought in about 1.858 million viewers.

But don't feel too bad for I Feel Bad, as the show still has a chance to fight for a second season tonight. On Thursday, Dec. 27, I Feel Bad will air its two-part season finale back-to-back on NBC at 8 p.m. and 8:30 p.m.

In case you need a refresher, the family sitcom focuses on Emet (played by Sarayu Blue), a video game artist (she leads an all-male team of designers) and mom-of-three. The single-camera show chronicles the daily happenings that Emet "feels bad" about as she attempts — and fails, as most do — to "have it all." As the A.V. Club further explained in its review of the show:

I Feel Bad takes its title from something that many women will identify with: the near-constant hum of guilt and Imposter Syndrome, societal pressures that manifest as voices in the back of one’s head, and judging each choice against an impossible standard.

The show, which premiered on NBC in September, has garnered mixed reviews from critics. For example, Variety wrote:

And yet the balance, in the pilot, between the toxicity of Emet’s co-workers and her generally fun and affirming home life is wildly off, so much so that certain jibes — as when Emet tells her daughter that her dance costume is “the kind of clothing that make juries extremely unsympathetic to victims” — read as less edgy than outright malicious.

Whether or not you are a fan of I Feel Bad, the diversity on the sitcom is worth noting. Emet, who is a woman of color, narrates the series. Many family sitcoms featuring characters of color either treat multiple family members as protagonists (for example, The Carmichael Show), or are narrated by the male protagonist (for example, black-ish), the A.V. Club observed. Various outlets praised the fact that I Feel Bad deliberately puts a female voice of color at the center of the story.

However, other reviews of the series saw that as the sitcom's only merit. For example, TVLine wrote: "If nothing else, I guess we should applaud this show for proving that racially diverse casts can make terrible sitcoms, too?"

Hopefully NBC will share the official word on a sophomore season of I Feel Bad soon — but in the meantime, a cancelation is all but said and done.