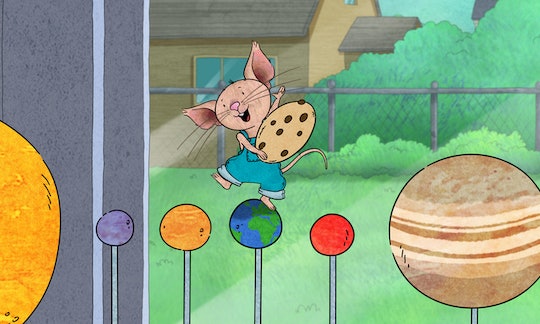 This Classic Children's Story Is Getting The Amazon Treatment

The new animated series is based on the classic children's book of the same, which was a philosophical tale about how one decision (giving a mouse a cookie) could lead to a number of events you never expected. However, The Washington Post recently pointed out that the book is also a commentary on the welfare system in the U.S.

First published back in 1985, the popular book, written by Laura Joffe Numeroff and illustrated by Felicia Bond, continues to be popular amongst children today. It also spurned a number of other books in the series, including If You Give a Moose a Muffin and If You Give a Dog a Donut. The new show will, of course, star Mouse as he goes on a number of adventures with his human friend, Oliver, and his animal friends that fans will recognize from the other books.

Although the show — which is now available for streaming — has already received a lot of buzz ahead of its premiere, there's no word yet if it will be renewed for a second season, though, the chances seem high. The series is executive produced by the books' creators and the heaad writer is Ken Scarborough, who worked on a number of popular children's shows like Arthur and Curious George.

While the show is intended for kids, it'll also appeal to adults who grew up reading these books as well. Especially because the artwork for the show sticks very close to the artwork of the original books, so the characters will feel familiar to viewers. Additionally, the music for the series will include new recordings by '90s pop artist, Lisa Loeb. Thus, this show is all wrapped up in nostalgic quality.

For kids, each episode will teach a lesson as Mouse, along with Olive, Moose, Pig, Cat, Dog, and others, get into a variety of shenanigans that lead them to new learning experiences. Therefore, the show will expand on the ideas in the book and present new situations for the familiar characters that kids can enjoy. It's unclear just how many episodes will be in this first season, but I'm sure it won't be enough for kids (and adults) who get hooked on this show.

The If You Give a Mouse a Cookie TV series has been in the works since 2015, when the book celebrated it's 20th anniversary. The show is just one of a number of new kids shows Amazon has been rolling out since then, bumping up their Amazon Prime Video programming with more kid friendly content. Some of the other kid shows the streaming service currently has in the works are Wishenproof, Sigmund and the Sea Monster, The Stinky & Dirty Show, and Danger and Eggs.

If you don't already have Amazon Prime, the service will cost you $99 per year or $10 per month. However, that also entitles you to free two-day shipping on most of their products, as well as access to streaming music and other perks. So it seems pretty worth it if you ask me. And really, can you ever put a price on nostalgia?