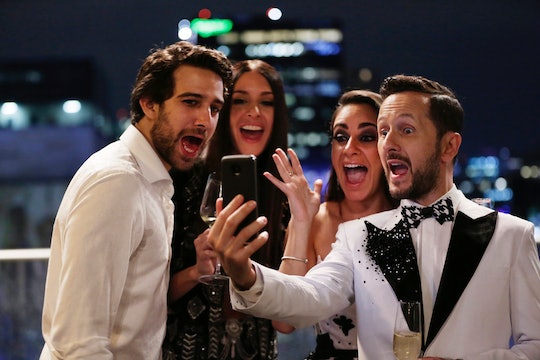 Is It Time For More Family Drama On 'Mexican Dynasties' Yet?

Coming from a Puerto Rican family, I can attest that no one does family drama quite like Latin families. And Season 1 of Mexican Dynasties had a ton — between Elán and Jenny Allende returning to Mexico City to try and advance their music career, Doris coming to take care of Raquel, and Paulina trying to push Oscar to find love. I know you're wondering will there be a Season 2 of Mexican Dynasties. So am I friends, so am I. I have too many questions about everyone's future.

I'm sad to say I don't have an answer for you yet. It's rare for reality shows to get renewed while a season is already airing, and the Season 1 finale of Mexican Dynasties is Apr. 30. New shows especially are always a toss up, so there is no point in speculating too much. Chances are, fans of the Bravo series will learn the outcome soon enough.

Elán was recently on E!'s Latinx Now! with wife Jenny and he was very honest about the rivalry that exists between him and his brother who are both trying to "make it" as musicians (in their father Fernando's shadow). "We just go with the flow and just, are really blunt and honest. At least I am," Elán said. "I mean, my brother...I just feel that way about him, I've always felt that way about him. Now there are cameras, that's the only difference."

Elán and Jenny also make Latin pop music together as the duo Shambayah. They recently signed a record deal with Top Stop Music without any help from the famous patriarch of their family.

On the show's finale, Mari focuses on getting Adan out of Elán and Jenny's house. She misses her cuddles with her 27-year-old son. Plus, the sudden brotherly love is kind of strange — which makes me think the brothers probably won't be living together for very long.

The brothers might have tension, but also on the season finale Adan expresses a desire to break free from his parents' grip. In a clip as reported by ET Online, Adan says to his brother, "I feel like these whole 27 years, it's been, like, such a pressure to be my dad's son." He continues, "I just feel like I'm taking a vacation from being Fernando Allende's son." It's quite a surprising turn. I'm rooting for him, but definitely willing to watch his journey for independence whether he succeeds or fails in a second season.

Elán is very supportive of his brother's sudden desire to break free — but I think his skepticism is healthy in this case. "We're getting him out of my parents' grip. This is maybe the beginning of Adan's independence. I don't know, but it's looking good." I doubt they'll have much time to look out for him if their careers take off. But again, I'll only know if there is another season.

One family on the show who might also need some freedom from each other are the Madrazos. The siblings take closeness to a new level.

"He's definitely mine, I'm not sharing," Paulina says of her brother Oscar in a video introducing the families, before clarifying that they do everything together except sleep. So, she was totally supportive of him finding a partner this season. On the finale, Oscar introduces Tarek to his kids, but I want to know how long Paulina can share Oscar. It's yet another reason why I need a Season 2.

Then there is the mother-daughter media moguls Raquel and Doris Bessudo. Losing a loved one is hard and they have a long way to go in their healing journey. Plus, I need to know if Mari will let Doris take over Adan's career. One season is definitely not enough Mexican dynasty drama. Quiero un segundo temporada de un programa de televisión y quierolo ahora. Translation: "I want a second season and I want it now!" Do you blame me?