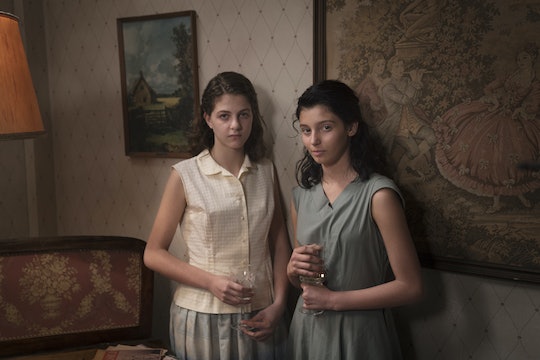 Season 1 of My Brilliant Friend is winding down its eight-episode run on HBO this week. Originally billed as a miniseries, the show, which is based on the novel of the same name, focuses on the lives of two girls living in Naples during the mid-20th century. But the Italian-language series, aired with subtitles for an American audience on the cable network, still has more source material to draw from. So will there be a Season 2 of My Brilliant Friend?

It was presumed by some from the beginning that this would be the case. After all, My Brilliant Friend is only the first book in the series dubbed The Neapolitan Novels, written by a mysterious author under the pseudonym Elena Ferrante. Over the course of just a few episodes, mirroring the most notable events of the book, Lena and Lila go from childhood friends to adolescents struggling to each find their own unique place in their small town. The story ends on a bit of a cliffhanger, and the second book picks up where the first left off.

Midway through Season 1, prior to the fifth episode airing in the U.S., it was announced that My Brilliant Friend was renewed for a second season, to be based on the second novel, The Story of a New Name. A cute announcement was made by the show’s account on Twitter:

The new season will not only bring about a continuation of the story, but likely several new cast members. The central characters and the heart of the story, Lena and Lila, were portrayed in My Brilliant Friend by two sets of actresses: Elisa Del Genio and Ludovica Nasti, respectively, for the first two episodes, then replaced by Margherita Mazzucco and Gaia Girace for the following six, in order to depict the passage of time. The second novel follows the young women into their early 20s, so it’s assumed that two new actresses will be brought in to play the best friends as young adults.

While the first season has seen the origins of their friendship and told a relatable story of how we often grow apart from those who mean the most to us, it sounds as though the second will depict an even harsher reality as they learn about the difficulties of relationships and the societal expectations of a woman in Italy during the 1960s. I don’t want to give anything away, but Lila’s life isn't everything she hoped it would be, and this sets into motion a series of events that hurts both women, with Lena finding herself once again helping her strong-willed best friend.

If the success of the first season and the quick to decision to renew are any indication, it’s likely that the third and fourth books will also receive adaptations. The novels, titled Those Who Leave and Those Who Stay and The Story of the Lost Child, bring the women into adulthood, as their friendship continues to experience ups and downs revolving around children, marriage, and even crime. However, you still have plenty of time to dive into those before they make their way to the small screen. For now, the second chapter of their young lives is the only confirmed season.