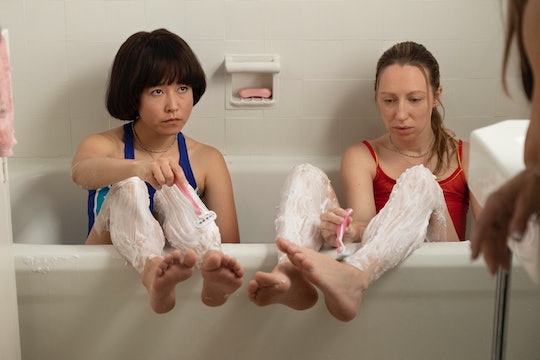 Over the course of the debut season of the Hulu comedy PEN15, protagonists Maya and Anna experience all the buoyant and brutal moments of seventh grade. And in the process, the audience gets to revisit all those coming of age horrors too, from cutting layers into your hair before the first day of school to agonizing over a note from your crush. But will this show be a one hit wonder or will there be a Season 2 of PEN15?

Hulu hasn't renewed the show yet, but that doesn't mean it won't be back for Season 2. PEN15 premiered on Feb. 8, so it's still very early in its run, which means it might be too soon to gauge the likelihood of future seasons. However, the positive reactions from critics and viewers should work in the show's favor. If PEN15 continues to resonate with its audience, then there's a good chance another season will be produced. I don't speak for Hulu, but I know I would be thrilled to see Maya and Anna take on a fresh round of challenges.

And it seems like their creators (and namesakes) Maya Erskine and Anna Konkle have enough ideas to last several seasons. While talking to The Hollywood Reporter, they made it clear that they didn't know whether there would be a Season 2 or not — but they had plenty of material they could use if there was one.

Erskine and Konkle play their thirteen year old counterparts on the show despite both being 31 years old in real life (which is part of the joke). That allowed them to play out many of their real experiences as their characters. Much of what Maya and Anna go through is taken directly from their actual lives. But there were certain things that Erskine and Konkle decided to save until Season 2, which they hoped would be more mature and darker than the first season.

The girls might find themselves experimenting more in the future as they move from childhood to true teenagerdom. But one thing was certain: they would never leave seventh grade. "Before we even pitched the show, we had set up arcs for the characters because as of now the goal is that they stay in seventh grade forever," Erskine told THR, adding later:

Then in the second season maybe they experiment more with drugs or we go through things that happened to us later on in middle school and then high school and just place that in the frame of seventh grade.

Erskine, Konkle, and their co-creator Sam Zvibleman have more than a few seasons planned, so it doesn't seem like it would be a problem for them to generate content for years to come. At this point, it's all about Hulu giving the show the green light. Until that happens, PEN15 is in limbo.

There's always a chance that the show won't be renewed and it'll become one of those brilliant-but-cancelled series that's gone too soon. But if audiences want to see more of Maya and Anna, then there could definitely be a second season of PEN15.