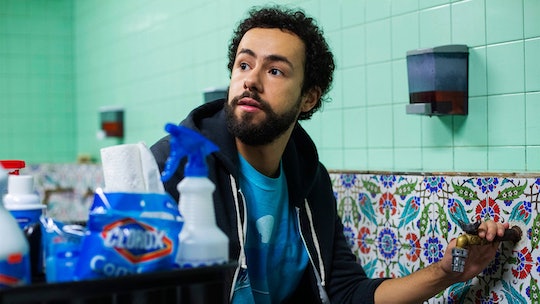 If you've already caught on to the new Hulu comedy series, Ramy, you're probably itching for more episodes. Ramy already gifted Hulu with 10 episodes so you don't want to be greedy, but that won't be nearly enough to appreciate this refreshing new comedy. Fans want to know if there will be a Season 2 of Ramy and I con't blame them — I'm one of them.

The series, co-created by comedian and star of the show, Ramy Youssef, may not get a season season pickup until the freshman show's had a chance to build a solid fanbase who want — need — more Ramy. I could argue there's already a pretty good fanbase amongst critics and viewers alike. With its fresh take on identity, religion, and relationships while navigating life as a first-generation Egyptian Muslim, there's literally nothing else like it on TV which is another reason the show should get a second season.

In the show, Ramy plays an "alter ego" of himself, struggling to find his place in the world while juggling traditional religious beliefs against that of his peers. It's a very millennial take on religion and politics with a comedic schtick. As Youssef told Vanity Fair, it's not an idealized depiction of his religion, but one that for him, feels honest. "Ramy's family is messy, they're ignorant, they're loving, they're a little racist ... they're everything everyone in America is," he said. "Meeting at our fault lines is much more interesting to me than meeting at shared values. I'm not trying to sell you something. If anything, I'm trying to show you where we are. There is nothing to hide."

Youssef may not describe himself as a revolutionary in this realm, but with past depictions of the Muslim experience resting heavily on harmful, dangerous stereotypes where the Muslim character is merely a means to an end — often a terrorist threatening harm to the Americans — Ramy flips this all on its head by filling in the blanks of what it means to live, realistically, as a first-generation American with familial and cultural beliefs too often challenged by society.

And though the character Ramy deals with the same kids of demands and issues, Youssef said via the New York Times, "a lot of the rules that are in the show are kind of the ones that I do have for myself personally." What makes Ramy a standout is the vulnerability of this man with conflicting ideals that people can relate to. I do believe in God,” Youssef told the NY Times. "I realized that there was this void in entertainment of someone talking about that genuine construct. I have a bit about it I do all the time about how there’s Friday prayers, and then there’s Friday night, where it’s like: 'No, I want to do both. I want to pray, and then, I also go out, and I have a girlfriend.'"

There's no clear answer on whether Hulu will renew Ramy for a second season, or more — right now. Past shows' renewals indicate there's a pretty high chance you'll get more episodes after this one, as they aren't known for cutting fans off with only one season to show for it. They tend to invest a little longer. So while that may not give you any comfort, you can do your part by tuning in to keep those ratings high enough that Hulu would be ridiculous to not buy another season.