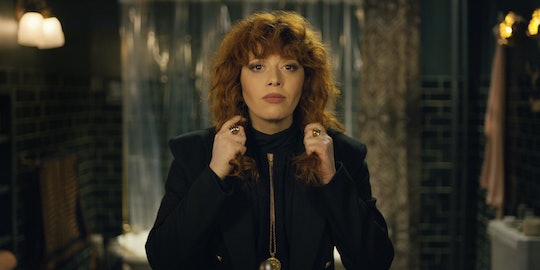 Here's What We Know About Season 2 Of 'Russian Doll'

Natasha Lyonne is making the most of her Hollywood comeback, already planning her next moves following the seventh and final season of Orange Is the New Black. A new series, Russian Doll, created by, written by, and starring her just premiered on Netflix and, given its rave reviews so far, people are wondering if there will be a Season 2 of Russian Doll. There's no news on the renewal front, yet, but Lyonne is poised to make a huge splash with the series.

Russian Doll is co-created by Amy Poehler and Leslye Headland, who also serve as executive producers alongside Lyonne. And if having an all-female creative team at the helm isn't enough, Russian Doll also has an all-female writing and directing team for Season 1. Lyonne and Headland both count themselves among those directors this season, along with Jamie Babbitt, who directed Lyonne in one of her most recognizable early films, But I'm a Cheerleader.

Netflix ordered an eight-episode first season for the series back in November of 2017, but the streaming service has yet to announce whether they'll bring the show back for a second season. There's already a considerable amount of buzz surrounding the series, so hopefully, a combination of strong ratings and Twitter enthusiasm will give Lyonne the push she needs to fall into favor with the powers that be at Netflix.

Russian Doll follows a woman named Nadia, played by Lyonne, on the day of her 36th birthday party. As the trailer reveals, she tragically dies after being hit by a cab on her way home. And then the whole day starts over again. It's a Groundhogs Day-esque premise in which Nadia is trapped reliving the same day over and over again, dying in increasingly unique ways as she tries to avoid the fate she knows is always coming. At one point, she successfully gets herself admitted to Bellevue Psychiatric Hospital, only for her ambulance to fatally crash on the way there.

The series also reunites Lyonne with her Orange Is the New Black co-star Dasha Polanco, who joins the cast as a guest star. Chloe Sevigny, a childhood friend of Lyonne's, also makes a guest appearance as an important figure from Nadia's past, according to Rolling Stone.

Unfortunately, in spite of its female powerhouse creative team, Russian Doll has an additional and controversial figure with a co-executive producer credit and that's Dave Becky, Louis C.K.'s former manager. Becky was implicated in C.K.'s sexual harassment allegations as someone who allegedly helped his client cover up the reports against him. C.K. ultimately admitted that the allegations were true and Becky issued an apology for ignoring the allegations when they first came to his attention. He continues to represent Lyonne and Poehler, hence, his co-executive producing credit on Russian Doll — though he's recently been dropped by Pamela Aldon, and it was announced last week that he would no longer be credited as a producer on the final season of Broad City, according to Vulture.

It's clear that Russian Doll gives Lyonne a vehicle to be unapologetically herself and play a role tailor-made to fit her when so few others have. And from the looks of the reviews, she's killing it (no pun intended).