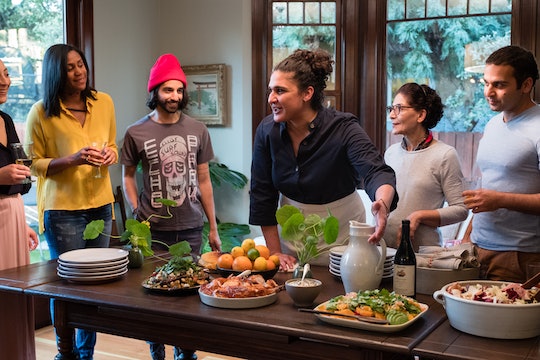 In Netflix’s new documentary series, Salt Fat Acid Heat, chef Samin Nosrat is taking viewers on a culinary trip around the world to discover the four fundamental elements of cooking. Home cooks and foodies are drooling over her inspirational cooking style and charming personality. So, will there be a Season 2 of Salt Fat Acid Heat? Because fans are hungry for more.

As of now, Netflix hasn't released any plans for a second season, but with its other popular cooking show, Chef's Table, going into its sixth season, a future for Salt Fat Acid Heat isn't out of the question. Of course, ratings and viewership will play a big part in the streamer’s decision to renew the series, but with all the positive buzz the show getting, there's a real chance that it lands another season.

But because the four-episode series is inspired by Nosrat and her New York Times bestselling cookbook Salt, Fat, Acid, Heat: Mastering the Elements of Good Cooking, the chef would need to be on board for a second season as well. In an interview with Rachael Ray Everyday Magazine, Nosrat explained that both her book and the show took a lot of time and passion to create, and she hinted that a second season of the series would rely on its reception and how much “creative juice” she could potentially add to it.

“It took a lot of years to make the show because we were talking about it for a long time. So my creative juices are tapped in some ways. I need to take a break,” she told the magazine. “I want to see the show land, I want to see how it’s received. I want to see what resonates with people, and I want that to help determine what to do next."

In the series, Nosrat travels the world to tackle each of the elements she believes are the staples of cooking. In the first episode, she travels to Italy to discover different fats — like olive oil and raw lard — and how they are utilized in cooking. For salt, Nosrat visits Japan, and for acid she took the show to Mexico. But in her interview with Rachel Ray Everyday Magazine, Nosrat revealed the series was going to tackle the culinary use of “acid” in her parents' native country of Iran.

“Acid is Mexico, but that was actually originally going to be Iran, because my family’s from Iran, and there are lots of acidic ingredients in the cuisine,” she told the outlet. “We were like two days from going, and the the state department withdrew its recommendation. So we had to hustle, because we had planned on Iran for like six weeks."

While Nosrat was happy to head to the Yucatan for the series, she hinted that she may want to film in Iran at some point. “It made sense to not go, and it made sense for me to gain some more experience and understand film making a little better, and I would very much like to go at some point because Westerners don’t really get a glimpse [of Iran],” she said. “There’s very little imagery of the beauty of Iran. That kind of made me excited, that I could bring imagery to the West.” You never know, if Nosrat and her crew can safely coordinate a trip to Iran, there is a chance it could be featured as part of a future season.

So, for now, there’s no news on a second season, but it’s nice to know that Nosrat is open creating future culinary journeys on camera. Meanwhile, viewers can take in the inspiration they’ve gotten from Salt Fat Acid Heat and head to the kitchen.