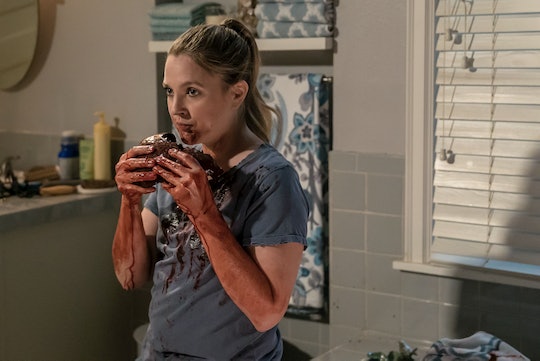 More 'Santa Clarita Diet' May Be On The Way

With the exception of a recurring voiceover role on Family Guy, Drew Barrymore hasn't been a series regular on TV since the early '90s. But Netflix's zombie comedy Santa Clarita Diet is about to bring her back to us. She co-stars along with Timothy Olyphant as Sheila and Joel, two real estate agents living in sunny and picturesque Santa Clarita, California with their daughter. The series only just debuted on Netflix on Feb. 3, but some may already be wondering: will there be a Season 2 of Santa Clarita Diet? We won't know until Netflix gets a sense of the audience numbers and viewer response to the show. But it does already have a promising buzz.

The quirky show turns the horror genre on its head by infusing a perky comedy about life in the suburbs with a lot of gore. Think Weeds meets The Walking Dead. Far from the typical zombie thriller in which the monsters are villains with no humanity, Santa Clarita Diet features its zombie Sheila, whose transformation is so subtle, no one even realizes she's undead at first. After an intense bout of vomiting one day, she passes out while showing a house, and wakes up unable to feel her heartbeat. She also experiences a few other symptoms, like lowered inhibitions, increased libido, and a taste for raw meat. With the help of Sheila and Joel's next door neighbor, a teenage boy who considers himself an expert in the paranormal, they are able to determine that Sheila has transformed into a zombie (though they feel that word is stigmatized and judgmental).

Far from abandoning Sheila or putting her out of her misery by destroying her, her family rallies around its matriarch in a warm display of support. Sheila loves her life as a zombie. She feels more confident and powerful than ever before and she doesn't see why she should have to give it up. And rather than ostracizing or shunning her, Sheila's family decides instead to help keep her alive by sustaining her taste for flesh as ethically as possible. They make a point of seeking out only really terrible people to kill in order to feed her, like, for example, "a young, single Hitler." ("We'd be heroes!" Sheila exclaims.) Of course, covert cannibalism gets dicey, so to speak, and the family has to navigate the treacheries of murder together in order to help the person they love. Perhaps Little Shop of Horrors meets Dexter is a more apt description.

It's a strong and clever premise, and the show's marketing campaign has been just as smart, with cheeky cannibal diet infomercials serving as early promos for the show in lieu of a more traditional trailer. We'll have to wait and see if the show picks up a significant viewership for an answer about Season 2, though. But for now, there's still hope.