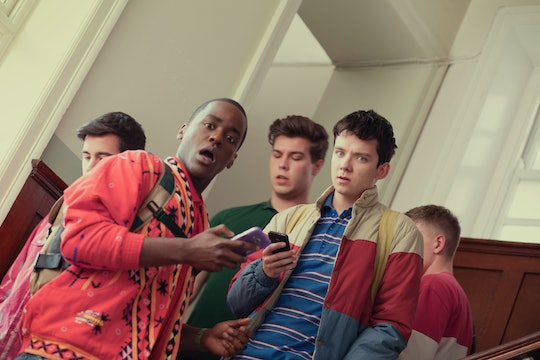 If your latest obsession isn’t the new Netflix series Sex Education, it’s time to change that. The teen dramedy is basically dominating the conversation at this moment — at least, until Netflix’s next big thing, which seems to happen every week these days. But with only eight episodes in the first season, most of us are left wondering will there be a Season 2 of Sex Education? And while sadly there isn’t a definitive answer on this front, I can say that if the critical and audience reception to the British series is any indication, the streaming service would be foolish not to order more episodes.

Again, if you haven’t watched yet, I’m not sure why you’re reading this, but I’ll give you a quick plot description of Sex Education anyway: Otis’ mom, Jean, is a sex therapist. He’s just a teenager trying to work out his own sexuality, but given his mother’s profession, he has a bit more technical information than some of his peers. His classmate, Maeve, decides that the two should team up and start a business giving advice to the rest of their teenage pals. As you can imagine, the awkward levels get pretty high, as teens advising each other and exploring their emotions and attractions usually gets a little messy.

Sex Education creator Laurie Dunn doesn’t know the show’s future at Netflix, but she has some plans in the works if it does happen. Speaking to Thrillist, Dunn said that she’s “totally in love with all the characters,” and though the first season was “very much Otis' journey,” there’s more potential to explore the other characters in Season 2. “We've got this great ensemble and these amazing young actors who have also just brought so much to those characters. It just feels like they could go anywhere.”

The demand for Season 2 is definitely there, especially if you’re looking on social media. Twitter has been non-stop all things Sex Education since it began airing, with fans discussing its merits.

The show really does have a lot to offer. So it makes sense that many are pushing for Season 2 just days after the first season came out.

One of the greatest things about the show is that these really are three-dimensional characters — no one falls into a typical high school student trope. Take Maeve, for instance (played by Margot Robbie doppelganger Emma Mackey), who is striking a chord with many young women out there with her feminist opinions.

Then there’s Eric, Otis’ best friend and one of the few out gay kids at school.

Even if the show is just one season, clearly, it’s made an impression. But I think chances are very high that there’s plenty more Sex Education to come in the future.