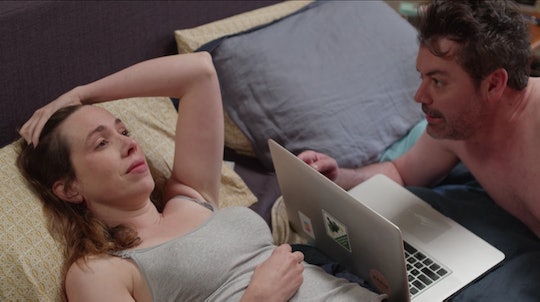 There Needs To Be Another Season Of 'The Letdown' & Here's Why

If you haven't already watched the first season of The Letdown, you should really get on that. The Australian dark comedy about new motherhood was just released on Netflix and it's completely addicting. But there are only seven episodes, which is definitely not enough. So will there be a Season 2 of The Letdown? You're going to want more ASAP.

The series was created by Sarah Scheller and the star of the show, Alison Bell, who plays Audrey, the mother of a 2-month-old who's having a rough time adjusting to stresses that come with parenting. Her baby won't sleep. Her husband is all over the place, her childless friends don't relate to anything about her anymore (and she really can't keep up with their lives either), and her quirky, sometimes judgmental mommy support group is one of the only things holding her life together. That and the drug dealer she meets in a parking lot while trying to sleep train her daughter Stevie.

It's a very real, very new look at motherhood and there should be way more shows like it. It's not all doom and gloom, though. She loves her kid and the connections she makes with the other moms aren't perfect, but they get better the more they get real with each other. So will there be more episodes in the future?

Bell and Scheller pitched the idea to a production company way back in 2011 and it finally just aired on Australia's ABC last year. It just got to Netflix this spring. There hasn't been any announcement yet by ABC as to whether more episodes will be made, but the critical reception (and Netflix's interest) has been very good, so it's likely there will be more eventually.

The success of the show has been exciting for the writing team, but it's daunting, too. Bell told the Sydney Morning Herald, "We feel a bit sick, a bit giddy. It's really thrilling. And it's kind of wild. I don't think either of us ever imagined this seven years ago when we were sitting in [Sarah's] kitchen."

Hopefully, they come up with more fodder for another season, because there needs to be more family shows like this on television. Scheller told If.com.au that when they first screened the pilot, it was destined to be picked up. "The story seemed to resonate strongly with so many women – those with and without children, and I knew (as did the ABC) that we had more stories to tell," she said. "Also, Alison’s performance was so strong I knew the ABC would be crazy not to commission it."

She added that the script was inspired by their real lives:

The inspiration for the pilot came about through our own personal experiences with new motherhood, but I guess more specifically it was after my own ill-fated encounter with a local mothers’ group that the idea began to percolate. Alison and I were both slightly disillusioned with how motherhood was portrayed on screen. It never seemed to go beyond the stereotypes.

They really do a good job at achieving that mission. On social media, viewers are either loving the show or hating it. But hating it because it feels way too familiar and close to their lives at the moment. So even the "bad reviews" are complimentary. On Reddit, one viewer wrote, "I have a 2 year old and now overdue with no. 2 and I started watching it last night. It's hilarious but I had to turn it off, the stress of the mummy group was too real!! I'll watch it after baby arrives."

In fact, the worst thing about the show is that there aren't enough episodes. Hopefully, there will be news about another season soon.

More Like This
10 Parenting Lessons We Learned From Red & Kitty In 'That '70s Show'
Exclusive: Watch How A Group Of Princesses Save The Day In Netflix's New Animated Series
For Real Life!? More 'Bluey' Is Coming, But We'll Have To Hang Tight For Season 4
When Does 'Yellowstone' Season 5 Come To Peacock? Not Soon Enough
What Parents Are Talking About — Delivered Straight To Your Inbox