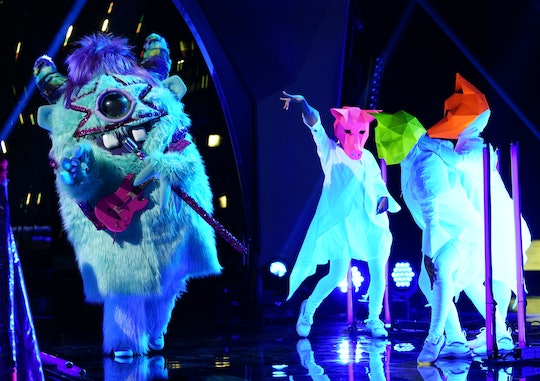 Monsters and aliens and pineapples, oh my! The Masked Singer aired its Season 1 finale on Feb. 27, relieving America from the agony that comes with theorizing about anything for weeks on end. The peacock, the bee and the monster kept you in suspense for about three whole months. Tuesday night, they revealed themselves as Donny Osmond, Gladys Knight, and T-Pain respectively, with monster T-Pain being crowned the winner. So now that it's over, are you ready for more? I hope so, because as Deadline reported in January there will be The Masked Singer Season 2, and executive producer Craig Plestis is going to make sure it's even more bizarre than the first.

Plestis revealed to The Hollywood Reporter just a few of the keys that make the show a success. Contrary to popular belief, he is rooting for you to unveil the celebrities' identities on your own. "...If you pay attention, you watch really closely, or watch it again, you can figure it out. We really want to make sure that we have all the tools there." If you paid attention to the license plate on the pineapple's car, for example, all you had to do was Google it to discover it is comedian Tommy Chong's birthday. Voilà, tropical mystery solved.

Of course, once you realize where you should have been looking the clues become easy to spot. Plestis admits that one of the reasons the show is so successful is that it takes advantage of the current obsession with theorizing about TV, but it gives you permission to relax about it. "Part of what's going on right now is there are many shows out there that are great — a lot of people are just a little too serious about some of them," he said. But there's nothing serious about Tori Spelling in a unicorn costume. It's just absolutely wonderful.

So, what joys can viewers expect for Season 2? The whole premise of the show is mystery, so Plestis can't give too much away. But now that people know to be on the lookout, there will certainly be even tighter security. I can't even fathom ways to make a set more secure than requiring celebrities to cover everything down to the color of their skin, wear shirts that say "Don't Talk To Me" on set, and requiring their guests on set to cover up, too. But I wish him luck and look forward to even more elaborate costumes. (Seriously, The Masked Singer costume designer is going to get an Emmy nom, right?)

Perhaps when T-Pain is done promoting his surprise new album — which he announced via Tweet — T-Pain will join the Season 2 panel.

Plestis loves the perspective former contestants could bring to the panel according to his interview in The Hollywood Reporter. "[Former contestants would] bring a unique perspective when they see our new batch of contestants come and perform that none of the other judges will have. They know what they had to do to keep that a secret and also what they had to do to perform," he said. I mean, according to an interview with The Hollywood Reporter that he did after he was eliminated, Joey Fatone wants to join the panel. That makes me wonder...could one of his former *Nsync bandmates — who he sang with practically every day for about seven years — fool him?

Since the Beverley Hills, 90210 remake was just announced, might Spelling entice one of her everlasting castmates to join the masked fun? Shannen Doherty might be free. We mustn't forget election year is creeping up. (register to vote!) So, politicians are fair game too, and Plestis has someone in mind. "I would love to get Barack Obama. So if you're listening, Barack ..." If he's willing to say his name, the chances of Obama appearing are probably slim. But, you never know!