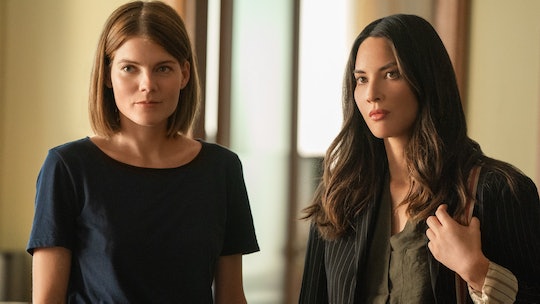 The Starz adaptation of Daniel O'Malley's 2012 novel, The Rook, is coming to a close with the eighth and final chapter, but fans of the supernatural series are still eager for more. But will there be a Season 2 of The Rook? To be totally honest, it's way too early to tell.

So far, the network hasn't issued a statement confirming The Rook will be renewed for a second season, but that doesn't mean it won't happen. The network has had some success with its novel-to-series adaptations, including with Outlander and American Gods. Like The Rook, each of these books had a strong cult following, and perhaps that alone was enough to guarantee at least some interested viewers. Because the world of The Rook could hardly be termed mainstream. For lack of a better word, it's a pretty weird place.

The show follows Myfanwy Thomas (Emma Greenwell), who wakes at London’s Millennium Bridge with no memory. Oh, and there is a circle of dead bodies surrounding her, all wearing latex gloves. It turns out Myfanwy is a high-ranking member of Checquy, the last secret service in the UK, which protects individuals termed, Extreme Variant Abilities (EVAs). She soon discovers she has supernatural powers — and that someone wants her to disappear. Myfanwy sets off on a journey to discover the truth, as any would-be superhero might.

However, many fans of the book feel the tone of the series is much different than that of the Starz creation. Some pointed out that the book version of Myfanwy is much lighter while the TV version is dark, untrusting, and paranoid. "It’s like [the show takes] the premise, which is a woman wakes up without her memory surrounded by dead bodies, and then it’s totally different,” The Rook star, Emma Greenwell told TVLine ahead of the premiere. "The book is amazing. It’s much more supernatural. There’s dragons and all these things, which sadly do not appear in our show. The television show tries to be rooted in reality and feel much more like a drama, a spy thriller with supernatural undertones."

The whole tone conversation may have something to do with Twilight and The Host author, Stephenie Meyer, who initially served as showrunner and adapted the book for TV herself. But Meyer exited after she and producers had creative differences. After that, Lisa Zwerling & Karyn Usher took over with Stephen Garrett as executive producer. "It really wasn’t a hideous process,” Garrett told IndieWire about Meyer's sudden exit. “What drew us all to this is that it’s a spy show with supernatural elements. [The British are] naturally duplicitous, and we love secrets. If you’re a spy, you can’t tell your friends or your loved ones what it is you do. If you have superpowers, you can’t tell your friends or your loved ones what you have."

In the same TVLine interview, Joely Richardson (Lady Farrier), warned viewers to watch each episode closely. "There were clues that you won’t necessarily pick up in one episode or two episodes. They pay off later," she said. To prove the point, she added that when Myfanwy returns to her apartment in Episode 1, clues are abundant as to what lies ahead. "It’s multi-layered."

As of now, there may be no concrete news as to whether The Rook will get a Season 2 pickup or not, but that doesn't mean you shouldn't enjoy Season 1. But those who loved the book may want to manage expectations about an exact adaptation.

More Like This
Kid First Responders Rescue Puppies In Disney’s Cute New Series
School Is Back In Session! 'Abbott Elementary' Was Officially Renewed For Season 2
'Workin’ Moms' Season 7 Is Reportedly In The Works! Here’s Everything We Know
Kim Kardashian Stars In Hilarious House Of The Dragon Parody, The Targashians