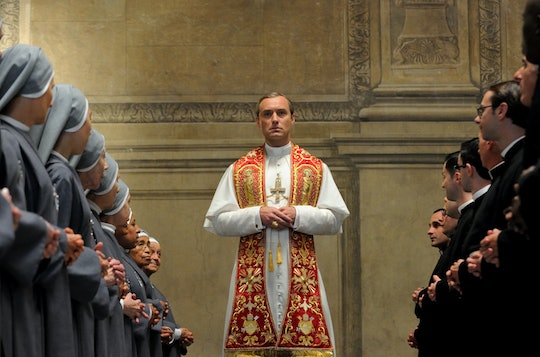 'The Young Pope' Should Be Blessed With A Season 2

The Young Pope was making waves before it even premiered. All it took was a trailer for audiences to latch on to the idea, whether it was out of genuine interest or because the idea of Jude Law as a sexy pope was just too hilarious to ignore. The show has spawned countless memes already, but it's also getting good reviews and is well-liked in Europe, where it premiered a few months ago. Considering there's so much buzz surrounding the series, will there be a Season 2 of The Young Pope?

It premieres on HBO on Sunday, Jan. 15, but the network didn't wait to see how The Young Pope would do before giving it the green light for a second season. In fact, the series got the go ahead for another season before it made its debut overseas; producer Lorenzo Mieli made the announcement in October at the Rome premiere for the show. However, despite that, not all of the details were ironed out. Though a second season was in development, nothing was official at the time. Part of that might be due to the show's collaborative production, which meant more than a few people had to sign off on it.

The Young Pope isn't entirely an HBO production. It was developed by an Italian company called Wildside which then partnered with three different networks for co-financing: HBO, Sky, and Canal Plus. That's why the series aired in Europe several months earlier than in the states. It also could influence the show's future. With so many cooks in the kitchen, so to speak, if one partner chose to pull out of the project, it could leave the others floundering; conversely, the show's fate doesn't rely on just one network so a possible cancellation may not be the end of things. Even if HBO chose not to move forward with it, Wildside's European partners could still be on board.

Not that any fans will have to worry about a cancellation. While some HBO series, like the semi-recent Vinyl, were given a second season order that was ultimately rescinded, the same isn't likely to happen for The Young Pope. Despite all the prestigious names associated with Vinyl both behind and in front of the camera, it didn't do well critically or with audiences. The Young Pope appears to be earning favorable reactions from both.

Though there's no telling what changes the future may bring, the fate of The Young Pope looks assured for now, so get ready for another unforgettable series. I may even go so far as to call it a religious experience. (Pun intended.)