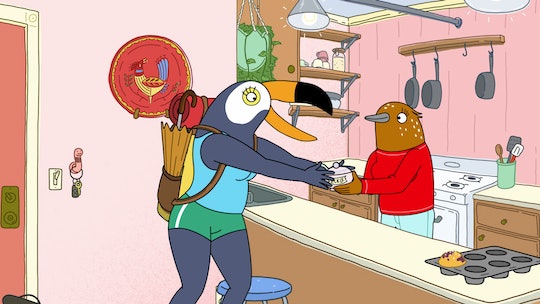 The eponymous heroines of Tuca & Bertie are just your typical best friends: two birds livin' in the big city and making the best of it, despite the obstacles that come their way. The show is delightful surreal, with jokes that zip by at breakneck speed and a frenetic, unique animation style. If you loved the first season, then you'll want to know if there will be a Season 2 of Tuca & Bertie.

The show hasn't been officially renewed by Netflix yet, but that doesn't mean it's going to be a one hit wonder. Tuca & Bertie only just premiered! It made its debut on Netflix on May 3, so not enough time has passed to figure out what its next step will be. Netflix probably hasn't even gauged its popularity by their mysterious metrics yet. At this point, it's simply too soon to say.

However, the odds of the show continuing are pretty good. It comes from a known quantity within the Netflix family: series creator Lisa Hanawalt previously worked on BoJack Horseman as a producer and production designer, developing the aesthetic of its anthropomorphized animals. Tuca & Bertie's connection to a tried-and-true show (BoJack was renewed for a sixth season) could give it a boost.

Not only has Hanawalt worked well with Netflix before, but Tuca & Bertie may have a built-in audience of BoJack fans eager to see what she does next. The shows aren't exactly alike, animal-people aside; Tuca & Bertie is even more wonderfully bizarre, if you can imagine it, and more fast-paced. But they're also just similar enough that they would likely have the same fans. If the story of a washed-up horse could succeed, why not two birdie besties?

The critical acclaim won't hurt its renewal chances, either. The Atlantic praised its outrageousness and sensitivity, as well as how it handles serious topics without losing sight of their importance. The protagonists might be birds but they're also women, and every aspect of their lives is treated respectfully, whether it's relationship anxieties or past trauma rearing its head. The show's thoughtful, female-centric perspective may win over audiences, too.

But it'll probably be some time before Season 2 arrives, if the show is renewed. Animation takes a while, but Hanawalt also has to figure out what to do with the characters after the Season 1 finale. Tuca and Bertie found themselves drawn in different directions, which would almost definitely impact their friendship. They're close and they love each other, but that doesn't mean it's smooth sailing all the time.

"It's going to be tough," Hanawalt said in an interview with TV Guide. "I'm curious, if we get a Season 2, where that tension is going to take us." She didn't think Bertie and Tuca would be splitting up any time soon, but knew there was a lot left to explore in their friendship. There may be things they hadn't dealt with fully that could bubble up later on.

There's enough material to make a second season possible, so with enough interest from viewers, it could be a sure thing.