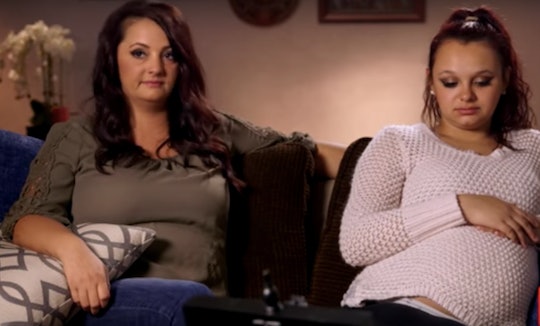 Filling the void left by MTV's Teen Mom and Sixteen and Pregnant, TLC brought to all of us Unexpected, a glimpse into the lives of three pregnant teenagers as well as their families, their boyfriends, and their moms, all of whom were teen parents themselves. It. Was. Riveting. So will there be a Season 2 of Unexpected? The show has been extremely popular, so there's a good chance that it could join TLC's regular roster of extremely compelling yet still unsettling reality programming. If there is a Season 2, you can bet your bottom dollar that I will be tuning in for every second.

But my instinct is to assume that the show won't follow the same group of teens as Season 1. In the way that 90 Day Fiancé, one of the network's other most popular shows, takes a look at different couples every season, I predict that if there is a Season 2 of Unexpected, it will introduce viewers to a new set of teens, their families, and their new babies. But of course nothing has been announced yet, as the first season is only just wrapping up. So obviously I'm not able to say definitively whether or not my theory is correct.

The details I do have are fairly slim. In a press release, TLC declared that Unexpected was the network's most popular show of 2017. TLC stated that it was their highest rated freshmen series since 90 Day Fiancé: Happily Ever After? for women in the 18-34 and 18-49 age brackets. They also noted that the show's premiere episode was a hit on social media, garnering millions of impressions on Facebook, Instagram, and Twitter, as well as becoming a top performer on the TLC GO app. None of this says that Unexpected is TLC's most popular show ever (how do you even compete with 90 Day Fiancé?) but it does indicate the show's huge popularity among TLC viewers, as well as the network's faith in it.

Considering these numbers, it is likely that the network will bring back the teen pregnancy show for another go around, probably at some point next year. But again, there is little information about what the next season of the show could be like since there has been no formal announcement yet. Perhaps I will be right and the show will focus on three new teens. Or perhaps the show will take the Teen Mom format and follow the same young women as they struggle to raise a family at such a young age.

In most other respects, the stars of Unexpected agree that their show, while similar, is different from 16 and Pregnant and Teen Mom. In an interview with Us Weekly, one of the teens featured, McKayla, said, "I feel Unexpected focuses more on teaching people what teen pregnancy is really like and how it can affect the family and the teens life as well." She also added about Teen Mom, "I feel it’s more about the drama and doesn’t include as many happy moments like Unexpected does."

Indeed, Unexpected has partnered with the National Campaign to Prevent Teen and Unplanned Pregnancy in the hopes that the show will spark meaningful discussions among young people about unplanned pregnancy. Because even though teen pregnancy rates have dropped, there are still nearly 210,000 teens who give birth every year, according to the Power To Decide website, which makes the topics in Unexpected extremely prominent. I know that I'm interested in seeing more. So hopefully the show does get renewed for another season.