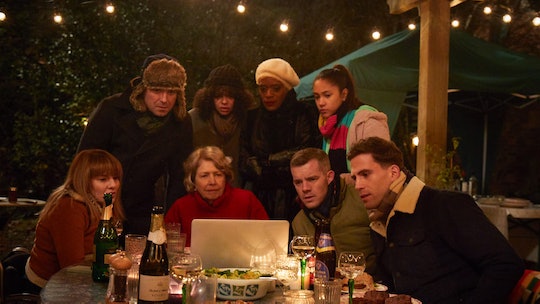 Queer of Folk creator Russell T. Davies' BBC One drama, Years and Years, captures the effects on a British family over a 15-year period through major political shakeups. The series began airing in March and ended on a major cliffhanger, but will there be a Season 2 of Years and Years, or is that all viewers get?

I hate to be the one to break it you, Years and Years fans, but at this point, there is no Season 2 on the horizon. In an interview with Radio Times, Davies said, "It always was a one-off. Even way back in production it was never discussed in terms of a second series." If that isn't enough to quench your curiosity, Davies posted a picture of characters, Stephen and Muriel, the day before the finale. The caption read: "TOMORROW [Tuesday, June 18]. It all ends, in the very last episode ever. Years and Years, BBC One, 9 p.m. Tuesday." This sounds like conclusive evidence the show is finished, but many shows have claimed their final episode and years later were resuscitated back to life. There is always hope, Years and Years fans.

The show's official synopsis reads, "As society changes, faster than ever, the Lyons will experience everything we hope for in the future, and everything we fear. They’ll fall in and out of love and grow old, fall apart and come back together, while constantly looking forward." If that doesn't sound like something straight out of real life, I don't know what is. The show has also been compared to Black Mirror because of the terrifying but plausible futuristic technologies featured. After all, this is supposed to be set in the near future.

The six-part series follows the Lyons family, based in Manchester, through the 15-year period, with each episode moving viewers a year or two into the future. The premise dives deep into how the four siblings, Daniel, Stephen, Rosie, and Edith, and their partners deal with economic hardships, evolving technology, and politics. The retelling of current affairs through fiction has been described as an "epic saga," so it's understandable fans want more, especially with stars like Emma Thompson, Anne Reid, Rory Kinnear, Jessica Hynes, Russell Tovey, Ruth Madeley, T’Nia Miller, Lydia West, and Jade Alleyne starring.

While the finale of the show aired weeks ago in the UK, U.S. viewers can catch the last episode on HBO on Monday, July 29.

In the same interview with Radio Times, Davies admitted the characters are ones to hope for; root for, saying, "you’ll care for them, you’ll cry for them, you’ll laugh. I hope it works." Though the show takes place in the future, it is still rooted firmly in reality, and reflects the general tenor of society as a whole. "History and society seems to be mad at the moment, it seems to be quite a fevered time. So it’s trying to capture that, it’s trying to guess where we’re going," Davies said.

A second season of Years and Years isn't in the works as of now, but never discount a well-received series. A show that captures the essence of the political landscape many are facing in real life is a rarity. Somehow, seeing it play out on screen makes me feel a little less alone in my own fears about the state of things. As for Season 2, I'd say give it time. Maybe this one will pick back up where it left off at some point, but I wouldn't hold my breath.