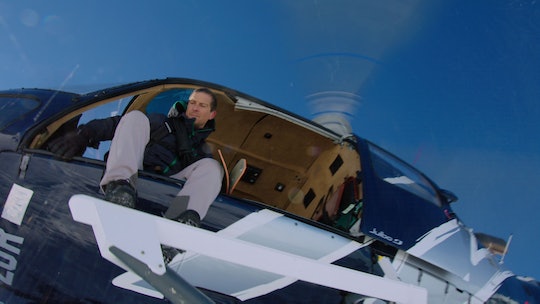 Have you already guided Bear Grylls safely out of the frozen lake? Decided if he had to free-fall or face the mountain lion? Have you helped him figure out what to do with those old explosives and how to care for that bleeding rattlesnake wound? If so, then you're already wondering if there will be a Season 2 of You Vs. Wild on Netflix. I don't blame you. Interactive content is an emerging genre and people are ready to see more of this new kind of television.

Well, take a minute to relax — because Season 1 just premiered on April 10. It's not unheard of for shows to get the green light for multiple seasons at the same time, but it is rare. Netflix will probably want to wait a little while for the ratings to come back before deciding anything. After living through all of the extreme adventures of Season 1 Grylls deserves to sit back and enjoy a burger and fries (or maybe fish and chips). There are no plans for Season 2 to report yet.

But don't worry! Everyone was excited about the show's potential and the future of interactive content on Netflix before Season 1 even premiered. At the press event announcing You Vs. Wild in March, Grylls said, "I’m so proud to deliver this first-of-its-kind live-action interactive series, really giving viewers an all access pass to explore the world and its landscapes in my boots. The stakes are high in this one!”

Netflix's VP of Content Todd Yellin expressed similar excitement when he spoke about the future of the interactive content genre. He also reflected on the success of the network's first attempt at interactive content for adults, Black Mirror: Bandersnatch. “We didn’t know how it would go. The internet exploded with conversation and delight," he said.

If you're still starving for delightful content of the interactive variety and have kids, you're in luck. Bandersnatch and the near-death experiences on You Vs. Wild are probably not for them, but Netflix began it's foray into interactive programming with kids content. So there are plenty of interactive shows that on Netflix that you can enjoy together right now.

Puss In Book: Trapped In An Epic Tale puts your child in charge of helping everyone's favorite Shrek cat find his way out of a fairytale. A dog and a ferret need your child's help testing (mostly terrible) ideas in Buddy Thunderstruck: The Maybe Pile. If they love superheroes, turn on Stretch Armstrong: The Breakout and put your kid in charge of fighting villains and controlling chaos. Netflix even has their Minecraft obsession covered with Minecraft: Story Mode.

One aspect of interactive content that makes it great for marathon-focused platforms like Netflix is that it inherently provides you with like double the content to watch. So, if you're craving another Grylls-level adventure already — it's waiting for you.

There is a risk that all of Season 1's outcomes get boring after a while but as soon as there is Season 2 news you'll know about it. Netflix is probably just waiting for Grylls to climb down another mountain before they announce anything.