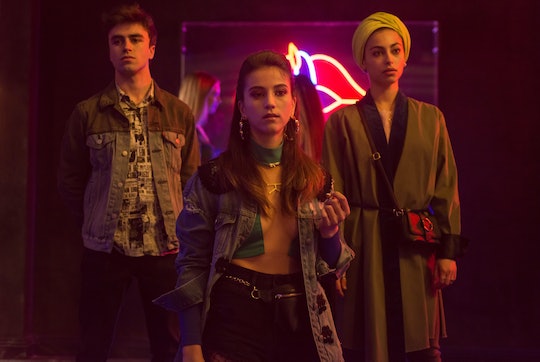 So You Spent An Entire Day Watching 'Elite' Season 2 — Now What?

Season 2 of soapy Spanish teen drama Elite has now dropped on Netflix and once fans have devoured it, they're bound to be wondering if there will be a Season 3 of Elite. Season 2 went into production January 2019, according to Variety, after a wildly successful first season premiered the previous fall. (Both seasons had been written before Season 1 even premiered.) In August, Spain's director of Netflix originals Diego Avalos confirmed to Variety that the series had been picked up for a third season. An Elite fan Twitter account first broke the news in a tweet on Nov. 18, letting fans know they can expect Season 3 sometime in 2020. Since Season 1 premiered in October 2018 and Season 2 comes out in September, my guess is that Season 3 is slated for a Fall 2020 release with another eight-episode installment.

Season 1 was an instant hit with its whodunnit murder mystery combining the police interrogation-style storytelling of Big Little Lies with the high school intrigue of Riverdale. And while Season 1 focused on solving the murder of pregnant Las Encinas student Marina, Season 2 will unpack its aftermath, including the wrongful arrest of her boyfriend Nano. Season 2 also introduces a brand new mystery when yet another person at the school goes missing. What the focus of Season 3 could be is anybody's guess, but series so-creator Darío Madrona revealed at a Season 2 press conference in Madrid that the flash-forward storytelling format is part of the show's DNA and they intend to continue utilizing it.

“We wanted to keep the fast-forward formula as a staple of the series, but at the same time be different,” he said, per Variety.

Netflix remains notoriously tight-lipped about its show ratings but it was revealed at the press conference that Elite Season 1 streamed in 20 million households the month of its release.

"I don't know how much more money the series cost [this season], but I have the sense the series achieved a leap in quality and, also, that I made the series I wanted to, and that's a rare sensation,” series co-creator Carlos Montero said of Season 2, according to Variety. So the streaming service appears to be putting full faith in Elite's creative team and giving them free rein.

Director Silvia Quer, who helmed Season 2 alongside two other directors, praised the quality of the show, adding, "What attracted me immediately to the series was that the characters were so well-constructed, so mature and with such rich interior life." Given its popularity with audiences, Quer clearly isn't alone in her awe of the series.

Season 2 introduces a gaggle of new characters: Georgina Amoros joins the cast as Cayetana, a budding Instagram star; Claudia Salas plays Rebeca, a working class fashionista at the elite Spanish prep school; and Jorge Lopez plays Valerio, Lu's half-brother and a hedonistic partier. Whether or not they stick around for Season 3 depends on how bloody Season 2 turns out to be.