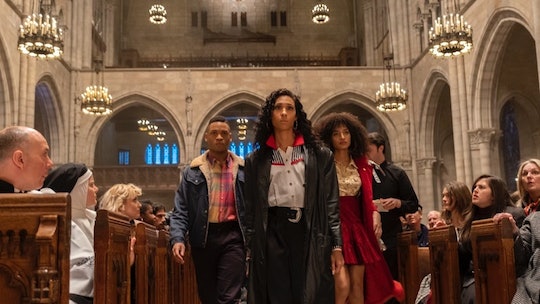 'Pose' Shakes Things Up In Its Season 2 Finale

When the final moments of the Pose Season 2 finale start winding down on FX, you may find yourself seized with a sudden panic. What if that's it? What if "In My Heels" is the last you see of the assorted Houses of Evangelista, Wintour, and Ferocity? But you needn't worry, because there will be a Season 3 of Pose. This show isn't going anywhere, at least not yet.

Pose was renewed in mid-June, shortly after Season 2 premiered, according to People. That may have been a result of the show's impressive uptick in viewers. The first episode of Season 2 outperformed the pilot by over seven percent in total viewers, with 1.2 million viewers in total. The show has garnered critical acclaim and is groundbreaking when it comes to trans representation on television. All those factors together must have made renewing Pose an easy decision.

FX Chairman John Landgraf spoke highly of the show in a statement about the renewal shared by People. He said that Pose had "elevated our culture and the TV landscape," also referring to it as "entertaining" and "enlightening." For all those reasons and more, Pose earned a third season, though it's difficult to pinpoint exactly when that season will air.

It may be too early to know where Pose will fit into FX's schedule, but there might be a long wait before the new episodes debut. Season 1 first aired in June 2018, with Season 2 arriving a year later in June 2019. If that pattern remains true for Season 3, then the show might not be back until June 2020. It's bittersweet knowing that the show will be back, but probably not for nine months or so. However, that's unconfirmed speculation; there's always a chance it could be back sooner, though there's no way to know for sure without an announcement from FX.

There may be big changes in store for Season 3, because the Season 2 finale is already taking a major leap forward in time. While speaking to Deadline, co-creator Ryan Murphy revealed that "In My Heels" would time jump to 1991, after the premiere already skipped ahead to 1990. It seems like there could be more time jumps in the show's future, too. Though Murphy didn't share just how many seasons he was envisioning for Pose, he did say that he thought it would end in 1996, which was the year AIDS medications became more widely available.

Every time Pose skips forward a few years, it shakes things up for all of the characters. In the gap between the first two seasons, new romances blossomed and new opportunities arose; anything could happen in a year, so the Season 2 finale may find everyone dealing with new problems or experiencing new joys. It could set up what's to come in the third season, giving audiences a taste of what the characters will be going through in years to come. That might make fans impatient for Season 3, but even if it takes a while, rest assured that more Pose is in the works.