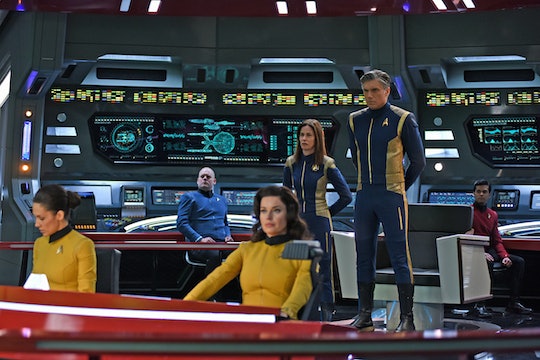 Season 2 of Star Trek: Discovery airs its finale Apr. 18. After a rocky Season 1, the show surged in popularity this past season, a wonderful but rare occurrence within the landscape of the TV industry. But what's done is done, so I know fans are already wondering if there will be a Star Trek: Discovery Season 3. Well, you're in luck.

The popularity spike did wonders for the show — and fast. If you're a fan, you probably know that it was renewed for a third season back in February. "The massive success of Star Trek: Discovery's second season launch exceeded our expectations in both driving subscriber growth and generating a phenomenal response from Star Trek fans," said Julie McNamara, Executive Vice President of Original Content for CBS All Access in a statement on CBS.com. "With Alex Kurtzman and Michelle Paradise at the helm, we look forward to continuing Star Trek: Discovery's journey, growing the Star Trek franchise on CBS All Access and bringing fans new Star Trek stories for many years to come."

"Many years to come" is such a nice phrase for fans to see in a statement like that. But, it was a long time ago in TV years, so I decided to take to twitter to see what everyone was saying now.

One fan already has a wishlist.

Another is already getting very impatient for it to air.

Fans are already agonizing over the future fate of their ships.

But some people just want more of their faves, no matter their relationship status.

Overall, there is just a lot of gratitude and anticipation going around.

I totally get it. There is no better feeling in the world for a TV fan than knowing your favorite show is coming back, or that something new you've been anticipating has gotten picked up. Star Trek: Discovery fans are getting the best of both worlds, because in that renewal statement, Paradise was named as co-showrunner for the new season. She joined the show's team mid Season 2, but Season 3 will be her first with the promotion.

Even better for fans, Paradise is an original Trekkie. "I grew up watching the original Star Trek and in fact it was fun when I got this job I went back and back and started watching all the original episodes again," she said on an episode of The Ready Room. "I didn’t get through all of them of course, but getting to go back and watch them again just reminded me how special the series is..."

She also revealed that the finale wasn't supposed to have a Part 2, but as you may remember, CBS All Access increased the Season order from 13 to 14. In fact, she said the network partners told writers to "have fun with the episode." So according to Paradise — they did. "There was so much story to tell and so much to wrap up and we really wanted to wrap up the characters’ journeys over the season and to try to squeeze that into one episode, we couldn’t have done it justice."

As all TV watchers know, "satisfying" is one of those words that is too subjective to mean much at all. *Sigh.* So, just sit back and enjoy the fact that there will be more in Season 3.