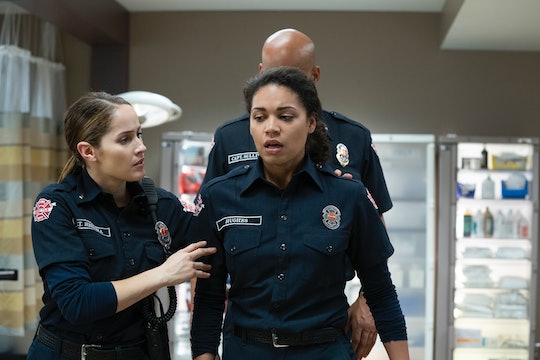 Hi Station 19 fans, how are you doing? As a veteran viewer of Shondaland TV shows, I know the deaths and departures of your favorite characters are harder on fans than non-fans could understand. Chief Ripley died in the show's crossover event with Grey's Anatomy and his death probably brings up some questions for his fans like: "How will I recover?" and "Will there be a Season 3 of Station 19?" Lucky for you, I have some insight into both of those questions. I wasn't kidding when I said I have experience recovering from Shondaland departures.

Let's get the business question handled first. Yes, there will be a Season 3 of Station 19. The new season will also bring in a new showrunner. Stacy McKee, who created the spinoff series, chose to exit ABC Studios when her deal expired, as reported by The Hollywood Reporter. It's a big loss, as McKee has been a part of the Grey's Anatomy family since Season 1 of the medical mega-hit.

Grey's Anatomy showrunner Krista Vernoff will now helm both shows. So it's natural to wonder what that will mean for the new season of Station 19 in particular. According to Deadline, Vernoff is going to build even more of a shared universe between the shows. It's a logical direction to go in, as crossover events between the shows are ratings gold for the network. The most recent one helped Grey's continue a five-week high streak and led Station 19 to the highest ratings in its history so far.

Queen of Shondaland, Shonda Rimes, isn't the creative boss of her ABC shows anymore as she's focusing on the titles she's producing for Netflix. But she still executive produces and oversees the shows from afar and released a joint statement about Vernoff's new role with co-executive producer Betsy Beers:

“Everyone at Shondaland is thrilled that our fans’ commitment to TGIT continues,” the statement read, in part. "Making the choice to have Krista oversee Station 19 was easy — the creativity she brings to the Grey’s Anatomy universe continues a tradition of storytelling we hold dear.”

That is everything I know about the new season so far, but I promised you some tips about recovering from Ripley's death so you are ready for Season 3. Luckily, since the show doesn't return in the fall, there is plenty of time. I'm a firm believer that the key to recovering from any TV trauma is Twitter. Your feels have to go somewhere, so don't be afraid to tweet them out.

Fans are already taking my advice:

Always be respectful and try not to tag writers and showrunners. Every TV show's goal is general chatter. But although they want fans talking, I don't think writers go to Twitter for ideas (they should though, fan Twitter is really creative).

Twitter is a great platform to let out all of your feels no matter what they are, and some Station 19 fans aren't in mourning, they're just excited for Season 3: