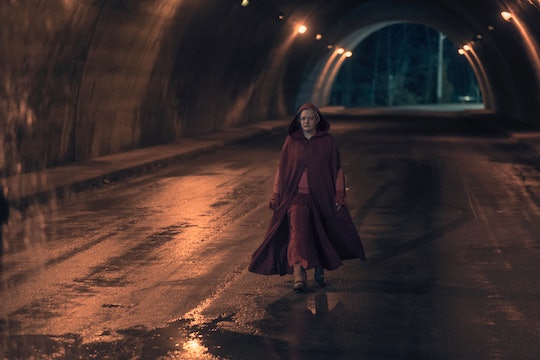 This Isn't The End Of 'The Handmaid's Tale'

Warning: this post contains spoilers for the Season 2 finale of The Handmaid's Tale.

When the credits rolled on the Season 2 finale of The Handmaid's Tale, it felt like very little had been resolved. Rebellion was breaking out in Gilead on every level, from wives wanting to read (gasp!) to Marthas smuggling handmaids to the border (yas kweens!). Emily escaped with June's daughter, but June herself chose to stay behind for Hannah. There's so much left to the story, but will there be a Season 3 of The Handmaid's Tale?

Praise be! The series has been renewed for another season on Hulu. The renewal doesn't come as a huge surprise because of the show's popularity, but it's still a relief to know that this isn't the end. The audience response, critical praise, and award show love (it was the first streaming show to win an Emmy for Outstanding Drama Series) has guaranteed that the show will be around as long as Hulu wants to keep paying for it.

But don't expect Season 3 to premiere any time soon. In an interview with Sandra Bernard on the SiriusXM show Sandyland, actress Ann Dowd (who plays Aunt Lydia) mentioned that the third season would begin filming in September 2018. It likely won't debut until April 2019 if it follows the same schedule as the first two seasons: Season 1 began on April 26, 2017 and Season 2 on April 25, 2018. It will probably be a while before the next chapter begins.

There are a lot of disparate threads to be tied up in the next season. June couldn't possibly return to the Waterford house like nothing happened, because absconding with the baby is sure to get her in a lot of trouble. She would need to find somewhere to hide out before plotting her escape with Hannah — if she's even able to get Hannah away from the family she is currently living with. June would be in a lot of danger if she was discovered and it's hard to evade notice in Gilead when you're a wanted woman wearing a bright red cloak.

Emily managed to get out of Gilead, but that's only part of her journey. The show hasn't focused much on the characters living in Canada, but their recovery from the numerous traumatic events they lived through will be an arduous task. Perhaps Emily's custody of Holly/Nicole will bring her into contact with Luke and Moira, which would be interesting to watch unfold. Plus it looks like Serena Joy's dedication to the cause is wavering, so she might just prove she's not a total black hole of garbage after all.

There's so much ground to cover in future seasons of The Handmaid's Tale, and showrunner Bruce Miller is prepared to tackle all of it. While talking to The Hollywood Reporter, he said that he had planned out 10 seasons in advance. Fans might even see the fall of Gilead one day in the future, complete with characters put on trial for their actions. Though June would always be the focus, there was still a lot to explore. According to Miller:

People talk about how we're beyond the book, but we're not really. The book starts, then jumps 200 years with an academic discussion at the end of it, about what's happened in those intervening 200 years. It's maybe handled in an outline, but it's still there in Margaret's novel. We're not going beyond the novel; we're just covering territory she covered quickly, a bit more slowly.

Hopefully when The Handmaid's Tale comes back, June will be leading the resistance and burning it all down. After two tough-to-watch seasons, that would be incredibly satisfying.