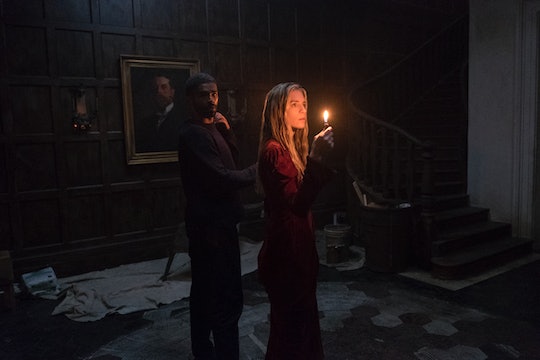 How Long Will Fans Have To Wait For Season 3 Of 'The OA' ?

Season 2 of The OA finally dropped on Netflix, and after years of waiting, fans are diving back into its mystifying story. Season 1 ended on a major cliffhanger, with the OA getting shot and waking up in a completely different place. Her new, multidimensional journey through time and space is thrilling, and fans can’t wait to see more of it next season. But will there be a Season 3 of The OA?

Netflix hasn’t confirmed a renewal of the series, at least not yet. But Season 2 premiered two years after Season 1, so there is still plenty of time for the streamer to announce a decision. While Netflix isn’t usually transparent about its ratings, one can assume that hype, buzz, and viewership play a big factor in their renewal and cancellation decisions. Some of the streamers shows — including Stranger Things and The Crown — have been extremely popular, so it was a no-brainer when they were renewed. On the other hand, sci-fi series like Travelers and Sense8 were cancelled despite their cult followings. So for now, fans of The OA will just have to keep their fingers crossed.

But the good news is that The OA showrunners — Brit Marling (also the lead actress) and Zal Batmanglij have a map for five seasons, and Netflix is pretty impressed by it. When talking to IndieWire, Netflix Vice President of Original Series Cindy Holland said that after hearing the pitch, executives were enthusiastic about the series’ five-season plan. “The OA is fantastic,” she told the outlet. “I think from the very beginning, when Brit [Marling] and Zal [Batmanglij] pitched us a five-season arc, we were really excited and sat at the edge of our seats when they started talking about Season 2. I’ve seen some early cuts and the fans will be very happy.”

After an exciting first season, fans were hungry for more of the OA’s story, but the two-year wait felt like an eternity for many. It turns out that the showrunners took their time with Season 2 because they wanted to do justice to the story, rather than throwing something together. In an Instagram post, Marling — who co-created and co-wrote the series — revealed that writing a new season with eight hour-long episodes was like creating an eight-hour film, and that it took a lot of time and effort to get it just right.

“Our chapters vary in length, scope, and even genre,” she wrote in her post. “There is no pattern. As a result, at every step along the way nothing can be imitated, it has to be invented. — Finally, because I’m both the lead actor and a lead writer we can’t leap-frog the production. We have to write all eight chapters up front before we can begin shooting the first chapter.” She added that from her perspective, creating an eight-hour film every two years is pretty fast, considering most two-hour films take the same amount of time to make.

With the enthusiasm Netflix has for The OA, there’s a good chance it will be renewed. Hopefully, if Season 3 is confirmed, fans won’t have to wait as long as they did for Season 2.

Season 2 of The OA is currently streaming on Netflix.