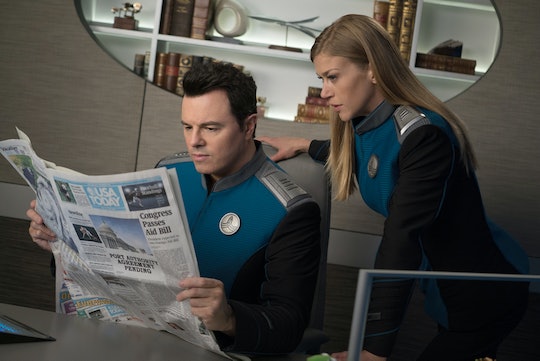 Fans Are Counting On Seeing 'The Orville' Return For Season 3

With the Season 2 finale of The Orville, fans are anxiously waiting to get news about the show’s future. The sci-fi comedy series took bolder steps this season, giving fans more insight into each character and their relationships, along with raising the stakes for the ship’s crew. With such a compelling season behind them, it’s no wonder fans are wondering if there will be a Season 3 of The Orville or not.

As of now, Fox hasn’t confirmed a third season of the comedy series, but considering how well the comedy did this season, there is a good chance it will be renewed. Most networks base their renewal and cancellation decisions on ratings and buzz, and for fans of The Orville, that’s a plus. According to Variety, in April, the show doubled its ratings and was one of TV’s biggest gainers in terms of viewership. With numbers like that, the chances of the show’s renewal definitely look good. Plus, Fox is clearing up it’s schedule next year, so there’s plenty of room for the show next season. Deadline reported that the network axed their Marvel drama The Gifted, along with their freshman sitcom, Rel, which leaves The Orville in a good place.

In a recent interview with The Popcast, The Orville associate producer Tom Constantino didn’t directly answer the question of whether or not the show would come back for Season 3, but he did say that the odds were in their favor. “I will say that everyone is in favor of it,” he said. “I mean, I will say, it’s a complicated thing. Hopefully, everyone will be happy.” He went on to say that while anything can happen, Fox has been a great support and that the network has gone above and beyond to accommodate the show. “If I could say more, I would,” he added with a smile.

Unlike the first season, Season 2 took viewers deeper into the lives of the Orville’s crew with a whirlwind of comedy, drama, and action. The show follows a spaceship called The Orville, and its Captain, Ed Mercer (Seth MacFarlane) and his First Officer and ex-wife Kelly Grayson (Adrianne Palicki). With a crew of humans and aliens, the Orville team takes on intergalactic enemies in an effort to keep the universe safe.

Because the show is spearheaded by Family Guy creator Seth McFarlane, people expected The Orville to become a goofy parody of Star Trek. But in an interview with Variety, the actor and showrunner explained that he wanted the show to be thoughtful and meaningful, which is why he took it in such a different direction in Season 2. “I had done the ‘Family Guy’ ‘Star Wars’ parody — I didn’t really want to do that again,” he said. “What I really wanted to do [was] some serious world-building, and develop characters that you really cared about, and create some real stakes.”

McFarlane also told the outlet, that while the The Orville’s fate is still up in the air, he is optimistic about the direction and evolution of the show. “What’s exciting at this moment is … now armed with a fully formed identity for this show, we’re playing in this universe and really just letting it flourish and blossom.”

Hopefully, Fox will announce renewal news for the series soon, and finally let fans breathe a sigh of relief.