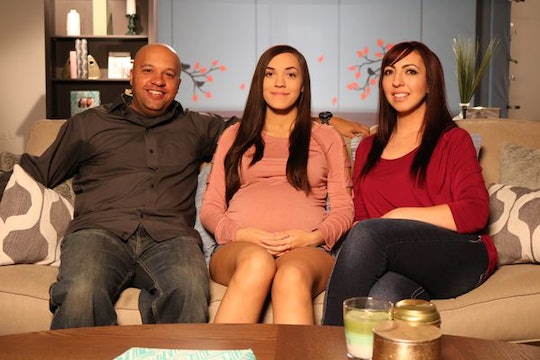 The Cast Of TLC's 'Unexpected' Is Coming Back For A Reunion

Season 2 of TLC’s reality series, Unexpected, introduced viewers to three pregnant teens, their boyfriends, and their families who are navigating life through their unexpected pregnancies. Viewers are hoping to see more of the teens' riveting lives, so will there be a Season 3 of Unexpected? There is no word on a third season yet, but considering the show’s popularity, it might be back with a new cast sometime next year.

If there is a Season 3 of Unexpected, it will probably follow some new pregnant teens and maybe some OGs, just like the season before it. In Season 1, viewers met three teen moms — Lexus, McKayla, and Lilly — and while Lexus and McKayla were featured on Season 2, it was primarily about a new trio of moms — Emiley, Laura, and Chloe. Season 2's teens return for a final "Tell All" episode, where they're giving fans updates on their lives, their kids, boyfriends, and families.

In a trailer for the “Tell All” episode — which is hosted by Ricki Lake — fans can see that there is still some impending drama left between the couples and their families. Emiley and Diego, the young couple that welcomed their daughter Aria into their lives back in February, seemed to have it pulled together for the most part, but in the trailer Emiley is seen in tears, confessing that she does everything for their daughter, while Diego does nothing. Emiley and Diego have not addressed their relationship status on their social media pages yet, so fans will have to wait for the “Tell All” episode to see where they stand.

Lexus — a teen mom featured on both Season 1 and 2 — and her boyfriend Shayden are also seen in the trailer for the “Tell All” where Lexus’ sexual orientation is called into question. On the last season, Lexus revealed that she was bisexual, and had been dating another woman, so Lake pointedly asks her about it in the promo. “What if you didn’t have a baby with him [Shayden], would you be with a woman then?” asks Lake, to which Lexus responds “I don’t know.” It will be interesting to see how that reaction weighs on Shayden, and whether or not it plays a part in their relationship moving forward. (Spoiler: it shouldn't).

McKayla is also featured in the teaser, and the clip makes it look like she might have cheated on her boyfriend and baby’s father, Caelan. “This was not planned, it was a one night thing,” McKayla says in the clip. But in a recent post on her Twitter page, McKayla — who revealed her second pregnancy on Season 2 — dispelled rumors of alleged cheated. “For the last time this baby is Caelans baby. I haven’t had sex with anyone else,” she wrote. “This baby is Caelans baby. Both of my kids are Caelans.” McKayla’s grandparents have been weary of her visiting her mother, so it’s possible that the “one night” she refers to in the clip has to do with family drama rather than anything else.

So while there isn’t an official confirmation that Unexpected will be back for Season 3, it’s safe to say there is a good possibility it will return. In the meantime, viewers can check out the casts' various Youtube Vlogs or social media pages for relationship and baby updates. The Season 2 cast of Unexpected reunites this Sunday for “Tell All” episode, which airs at 10 p.m. ET on TLC.