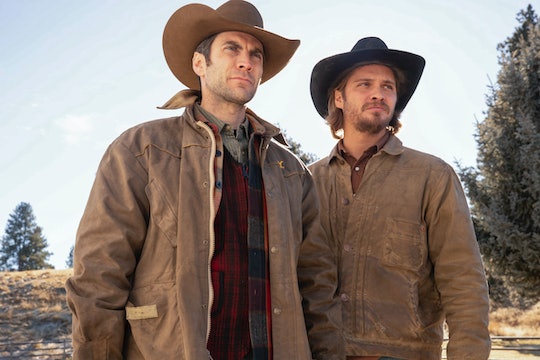 Get Ready For A Wild Season Finale On 'Yellowstone'

The Season 2 finale of Yellowstone, which airs on Aug. 28 on the Paramount Network, is going to be an eventful hour of television. The ongoing feud between the Duttons and the Becks will be coming to a head as the Duttons attempt to save a loved one. It's the kind of high-stakes situation that could leave viewers on an unfortunate cliffhanger. But there will be a Season 3 of Yellowstone, according to Deadline, so fans don't have to worry about being left in the lurch.

Yellowstone was renewed back in June 2019, shortly after its second season began. The third season will have 10 episodes, which makes sense because Season 1 had nine episodes and Season 2 also had 10. And while the premiere date hasn't been announced yet, that's an easy guess too. The first two seasons premiered on almost the same day, one year apart — Season 1 debuted on Jun. 20, 2018, with the second season following in 2019 on Jun. 19. Presumably, Season 3 will air around the same time in 2020. That may feel like a long wait, but it should go by fairly quickly. Especially since Season 2 isn't ending with a wide chasm of uncertainty stretching on ahead of it. The next season is a guarantee.

There's already been some major casting news for Season 3, too. Josh Holloway, of Lost and Colony fame, will be joining the show in a recurring role. He may come up against Kevin Costner's patriarch John Dutton, because he's playing a hedge fund manage with "ambitious plans" in Montana. Considering John is the owner of the largest contiguous ranch in the U.S., he may have something to say about Holloway's character and his big plans.

But before the show gets to that, it has the Season 2 finale to deal with. And star Denim Richards promised that it would be an intense one. "It's going to be shocking, terrifying, and satisfying," he said during a conversation with CinemaBlend. He felt like he always made some kind of comment that the next week would be more unexpected than the week that came before. Though audiences might have felt that there was no way the show could keep topping itself, Richards assured them it was possible. He thought the Season 2 finale was "going to be so wild," but it would also be "very satisfying at the same time."

Having Season 3 on the horizon also gives those who haven't watched the show some time to catch up, if they're interested. Yellowstone isn't streaming on Netflix or Hulu, but both seasons can be purchased on Amazon Prime. However, you can also find the show for free on the Paramount Network website. You'll need a cable provider to sign in and watch, but once you're in, you'll have access to all 19 episodes (and some behind the scenes clips, too).

Yellowstone may be over for the season, but it's just a matter of time until new episodes arrive.

The Yellowstone Season 2 finale airs on the Paramount Network at 10 p.m. ET on Aug. 28.