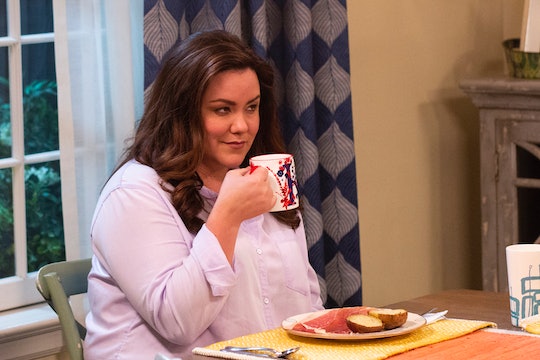 Often, viewers have to wait weeks or months to see if their favorite shows will be back for another season, but ABC hasn't left you hanging. Deadline announced the renewal news in early May of this year. The show recently saw a shift in the schedule, moving from Wednesdays to Tuesdays, where it did well; according to Deadline, American Housewife earned 4.25 million viewers for its April 30 episode, "Field Trippin'." With a viewership that vast, it's no wonder the show will be back for Season 4.

Figuring out when it will return is a little bit tricker. A premiere date hasn't been announced yet, though the show typically airs from autumn to spring. The first season debuted in October, but the following two had September start dates; all three concluded in May. That pattern seems well-established, so fans can likely expect new episodes sometime in September 2019.

American Housewife is only going on summer break, but it still found a fairly epic way to say goodbye for the next few months. The Season 3 finale, entitled "A Mom's Parade," is a musical spectacular complete with original songs and group choreography. When Katie becomes frustrated by her family's lack of appreciation, she bounces and leaves them to their own devices. Her husband Greg has to handle everything on his own instead of relying on Katie.

From the trailer, it looks like the entire cast gets in on the jazz hands: star Katy Mixon belts a number in the family home while her husband and kids look on; her daughters go full Glee at school; Ali Wong performs a rap about Westport, CT; and there's some umbrella choreo at a carnival that I'm sure makes complete sense in context.

According to Broadway World, the episode's four songs were provided by Justin Paul and Glenn Slater. Paul previously worked on The Greatest Showman and Dear Evan Hansen, while Slater has worked on Tangled and School of Rock: The Musical, among others. Those umbrellas got to spinnin' thanks to the work of choreographer Ashley Wallen, also from The Greatest Showman. That's a pretty legit musical pedigree, so fans of song-and-dance numbers should be satisfied by the Season 3 finale.

Listening to those four songs on a loop could help fans pass the time until next season. It may be four months or so until American Housewife returns for Season 4, but those weeks should pass quickly enough. Knowing the show was renewed makes that wait a little bit easier; there's no need for uncertainty, because it will be back at some point. It's just a matter of when.