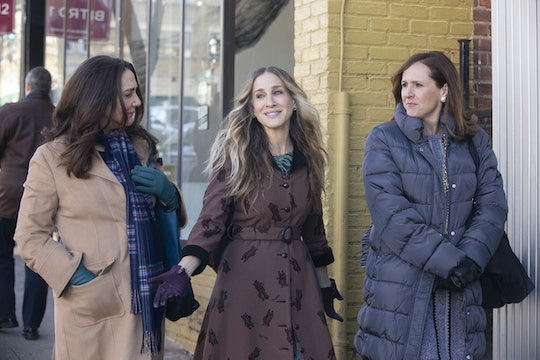 'Divorce' Fans May Not Be Super Pleased With This News

Now that the third season of HBO's dramedy, Divorce, is coming to an end, fans want to know if there will be a Season 4 of Divorce, or if it's another one that bites the dust. Would you like the good news or the bad news first?

According to Deadline, Divorce won't get a Season 4 renewal. Conversations between series showrunner, Liz Tuccillo, producers, and HBO led to the decision that all six Season 3 episodes would be the end, for a number of reasons. "Between scheduling and complicated lives and actors, it was a confluence of things that came together that helped us decide that six was something that we wanted to do, and we felt confidence that Liz could achieve what we were all hoping for for this final look at Frances and Robert," Sarah Jessica Parker, star and executive producer of the show, said in a statement as reported by Deadline.

As far as how the show was received by audiences and critics, Season 1 averaged a 60 rating on Metacritic, without much improvement for Season 2. The show also didn't garner any major award nominations, aside from a Golden Globe nod to SJP. Awards like the Golden Globes don't have to mean much, but it certainly looks like the show didn't resonate with as many people as it hoped to. That's not to say it didn't have fans who will miss it.

Divorce follows SJP as Frances and her husband, Robert (Thomas Haden Church), as a divorcing couple after Frances' affair is exposed. I wouldn't say the series is only about the divorce, but how each navigate the resounding after-effect of it all. Spoiler alert: They don't do it very well. But who does? The first season focused on how terribly the couple handled the divorce process, while Season 2 ended on an optimistically hopeful note. Season 3 has been a sort of "fresh start" for Frances and Robert, as they each regain control of their newly found singledom.

"Sarah Jessica Parker has a unique ability to showcase the complexities of personal relationships with such empathy and humor," said Amy Gravitt, EVP, HBO Programming in the statement. "With Divorce, she took our audiences through the keyhole and into the lives of a modern day couple dealing with the fallout of splitting up. As we end with the 3rd and final season of the show, we look forward to our next endeavor with Sarah Jessica and Pretty Matches."

Sorry, Divorce fans, but it looks like Season 3 is all you get of this particular journey. It's not like Frances and Robert can evolve much more through a story that begins as a relationship ends. If you're a mega-fan, it should ease your mind to know SJP's production company, Pretty Matches Prods., has had a 14-year first-look deal in place with HBO, so you'll likely see more projects similar to Divorce from the team in the future. I also wouldn't discount a revival, reboot, or spin-off. You just never know.