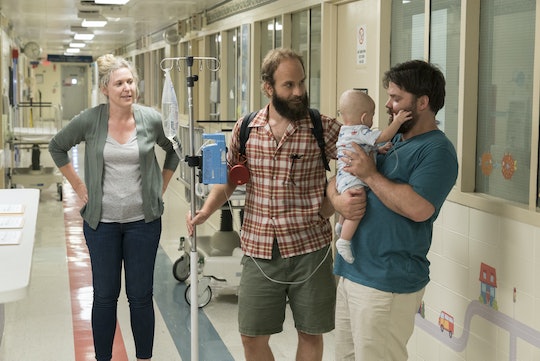 HBO's 'High Maintenance' Will Get You High On Life For Sure

Amidst the onslaught of new shows available for streaming, on demand, and on cable, there are some you loyalty tune into and others you've probably missed out on. If you're an avid fan of the HBO series, High Maintenance, and all its comedic, but oh-so-real moments, I'll bet you're caught up on Seasons 1-3. And, because I reads minds in my spare time, you came here wondering if there will be a Season 4 of High Maintenance. Am I right? (Don't tell me if I'm not).

Well, my friends, you may not get a clear answer until all of Season 3 has aired. Yep — you're in for a wait. According to Deadline, HBO President of Programming Casey Bloys said, "We will make decision after we let them air through but creatively, I’m happy with both of them (referring to both High Maintenance and Crashing). If you're one of the few yet to know about the show, in summary, it's based on the Vimeo web series created by previously married (but now separated), power duo, Katja Blichfeld and Ben Sinclair. In High Maintenance, Sinclair also stars on the show as "The Guy," who delivers weed via bicycle in Brooklyn. Critics and fans alike raved about Seasons 1 and 2, with Season 3 airing now.

In every episode of the comedy, The Guy gets a closer perspective of his customers. Among some of the amazing guest stars are Jemima Kirke, Margaret Cho, Guillermo Diaz, Rosie Perez, Kathleen Chalfant, Ken Leung, and Annie Golde — all enough reasons to celebrate Season 3 while awaiting news about Season 4.

TV Line reported the overall rating average for Season 3 of High Maintenance to be at 0.07 in the 18-49 demographic, with 226,000 viewers. If you're unsure what that means in terms of context, the third installment is down by about 35 percent. So, Season 2 had slightly bigger numbers, but that still doesn't determine whether or not execs will roll out another season. Again, it's a sit-and-wait kind of deal. With Blichfeld, and Sinclair (and Russell Gregory) as executive producers, High Maintenance has been an "unlikely success." Adapting from web to TV doesn't always translate but this one seems to have found its place among HBO viewers, at least for now.

If you're wondering how this thing ever got off the ground in the first place, Blichfeld and Sinclair had a chance meeting at a barbecue in '09, according to Vanity Fair. They bonded over a shared love of, what else, weed, and launched their Vimeo series in 2012 — just as "Colorado and Washington became the first states to legalize recreational cannabis." Three years later, they signed with HBO and the rest, as they say, is history. While their marriage didn't make it, the pair have remained dedicated to creating the best show possible.

So far, there are 24 episodes of High Maintenance ready for your viewing. As for their own relationship with cannabis, Sinclair weighed in saying he uses it to relax, wondering if he should quit altogether "I can’t say I have a healthy relationship with pot—I really don’t!" With the concept relying heavily on those sentiments, it's a curious idea as to what would become of it if Sinclair's personal relationship with the drug changed. Regardless, High Maintenance gives a fascinatingly hilarious glimpse into the lives of New Yorkers. Until there's word on the possibility of a Season 4 renewal, maybe take a page out of The Guy's handbook and keep on keepin' on.