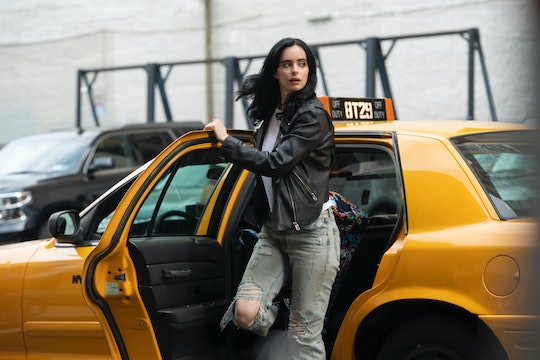 The third season of Marvel's Jessica Jones just dropped on Netflix, and fans who have already burned though it may be wondering if there will be a Season 4 of Jessica Jones. Sadly, in a Deadline exclusive released earlier this year, it was reported that Netflix would be axing all its remaining Marvel shows.

Just one month after the Season 2 debut of Marvel's The Punisher, Netflix announced that it would be canceling the series, along with Jessica Jones after its third and final season aired in June. (Season 3 of Jessica Jones had already been completed when Netflix made the announcement.) Netflix's other Marvel series — Daredevil, Iron First, and Luke Cage — all ended their runs in 2018 after three, two, and two seasons respectively. This leaves the streaming platform with no remaining Marvel heroes.

“We are grateful to showrunner Melissa Rosenberg, star Krysten Ritter and the entire cast and crew, for three incredible seasons of this groundbreaking series, which was recognized by the Peabody Awards among many others,” Netflix said in a statement following the announcement. “We are grateful to Marvel for five years of our fruitful partnership and thank the passionate fans who have followed these series from the beginning.”

Partly to blame for Netflix's severed relationship with the entertainment company is the rise of forthcoming streaming platform Disney+, which plans to serve as a hub for all Disney-owned content, which now includes Marvel Entertainment. Disney+ already has plans in place for Marvel Cinematic Universe projects starring Loki, Scarlet Witch, Falcon, and the Winter Soldier, according to Variety. Unfortunately, that doesn't mean that Jessica Jones fans will see her on Disney's streaming platform anytime soon; sources told Variety that part of Netflix's deal with Marvel stipulates that characters from The Punisher, Luke Cage, Iron Fist, and Jessica Jones can't appear on any non-Netflix platform for at least two years after cancelation. It is, to put it lightly, a total bummer.

After news of the Netflix cancelations broke, Jeph Loeb, the Executive Vice President of Marvel Television, wrote in an open letter to fans, "Our Network partner may have decided they no longer want to continue telling the tales of these great characters...but you know Marvel better than that."

I love these people to the moon and back. It has been a dream to play Jessica alongside my amazing cast and the best crew in the business for these past 5 years. I am so grateful for every second of it. We have THE BEST fans. You guys mean the world to me and I appreciate you beyond words. The final season of #JessicaJones is coming later this year and I am proud of how we complete JJ’s journey. I can’t wait for you all to see it.

The show may not have ended on its own terms, but hopefully fans can rest easy knowing that Jessica Jones herself was proud of the way the series went out.