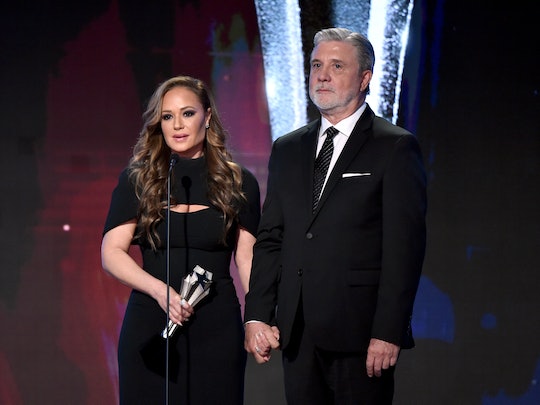 Leah Remini's Show About Scientology Is Coming To A Close

Leah Remini is perhaps best known for her role as Carrie Heffernan on the popular CBS sitcom King Of Queens. But since 2016 she's hosted a popular A&E docuseries dedicated to sharing her personal experiences with Scientology and allowing other people who have left the organization to do the same. It's lead to so much healing for many people — but will there be a Season 4 of Leah Remini's Scientology show?

I'm sad to report that Leah Remini: Scientology and the Aftermath is coming to an end. There won't be a Season 4, but the series is returning one last time with a two-hour "explosive" finale special, according to The Hollywood Reporter. The episode will focus in part on the allegations of rape that were filed against scientologist and actor Danny Masterson by two women.

The special was filmed in front of a live studio audience of other former scientologists and airs Monday, Aug. 26. Remini and co-host Mike Rinder — also a former scientologist — will hear and discuss "testimonials alleging that Scientology policies have hindered members from reporting instances of sexual assault and physical violence to the authorities," according to THR.

Remini decided to end this show — it wasn't cancelled. But THR reported that Remini's fight against the organization is far from over. She will continue her efforts on another upcoming show, but no further details about that project have been announced. On her decision to end the A&E show Remini told THR, "We’re exposing so much, but we need to do some other things to bring the fight to a different level...There’s only so much you can do in this forum and in this way."

If you watch the show, you won't be surprised to learn that the Church of Scientology had a response to the news. “Leah Remini has blood on her hands," a representative for the organization told The New York Post in a statement that accuses the show of "distortions and exhortations to hate and bigotry." The statement goes on to claim that Remini and her show are partly responsible for the murder of a scientology worker who was "egged on by Remini’s horrendous distortions." As reported by The Post, the statement concludes, "finally, A&E pulled the plug on Leah Remini’s hate machine."

For her part, Remini has expressed gratitude to viewers. "We thank our viewers for caring in the way that you do. It means everything to us. There is not a day that goes by that we don’t have people stop us with a ‘thank you for doing what you guys are doing’ and it’s your support that gives us our strength to carry on. And carry on, we will," she said in a statement per Entertainment Weekly.

In the trailer for the special Remini promises to "go out with a bang" hinting that topics she and Rinder have never been allowed to speak about before will be fair game. Aftermath was a huge battle, so don't leave before the end.