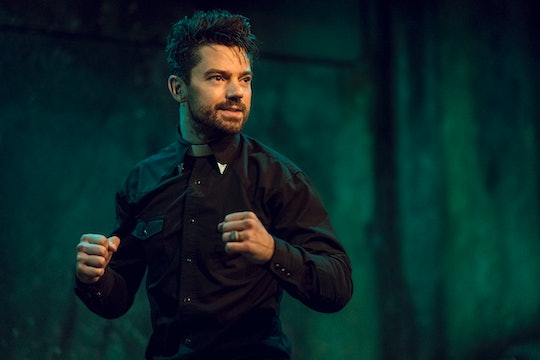 Fans Are Worried There Won't Be A Season 4 Of 'Preacher'

The Preacher Season 3 finale is airing this Sunday, and the first question fans have on their minds is: What happens next? The second question is fairly obvious: will there be a Season 4 of Preacher, or is this season finale an unplanned series ending? AMC has been mum about it, unfortunately.

Earlier this summer at the Television Critics Association summer press tour, AMC officials announced renewals for Better Call Saul, McMafia, and Fear the Walking Dead. Noticeably missing from the list was Preacher. There has been no news since of a renewal, but at the same time, there's no news of a cancellation. It's safe to say that the show is in limbo until AMC releases an official decision.

I wouldn't say that fans should panic yet, though. Last year, AMC announced the renewal for Preacher Season 3 in October, so the same thing may happen again. Even though the season finale is occurring August this year, it wasn't that much later last year; the Season 3 finale aired in September, so fans had to wait a month to know that the show will be back. The same easily could occur this year. Seeing as there's no indication that it's canceled, I'd say it's a definite possibility.

Preacher is based on a comic series that ran for 66 issues from 1995 until 2000. According to Collider's Evan Valentine, who is a self-described huge fan of the comic, Season 1 of Preacher acted as a "prequel" of sorts, whereas Season 2 was where the show picked up the plot of the comics. Of course, there are some big changes because that is the nature of adaptations, but speaking towards a perspective of whether Preacher can run for Season 4, it seems like it definitely can.

Not only are there a lot of issues of the comic to choose from, but it's clear showrunners aren't afraid to deviate from the source material either. Nerdist's Kelly Kanayama, who is also a fan of the Preacher comics, called the show a "not-so-comic adaptation." So, I think that says a lot about the liberties producers take. Even if the show had gone through all of the issues, that may not stop them from creating new characters and storylines.

Season 3 is really about how he escapes from the ghosts of his past. It’s kind of true for all 3 of the major characters. How do they escape their name, where they came from, who they are, what is family, who is the best family, can family be something other than the people who raised you?

There's no implication that he or other producers intend to stop the show here. At Comic Con, however, Catlin did comment that Preacher is "building towards a climax" this season. He could just be talking about the season finale — and I'm sure viewers hope that's the case — but perhaps he's hedging his bets in case the show doesn't get renewed.

I can't tell fans not to get worried because let's face it, they already are. On Reddit, there are threads about Preacher being canceled where Redditors try to encourage each other that there's still hope. In today's TV landscape there is so much to watch but at the end of the day, viewers just want to see their favorite show, so I understand the worried feels. For now, though, they should enjoy the finale and keep their fingers crossed that this won't be the end of this story.