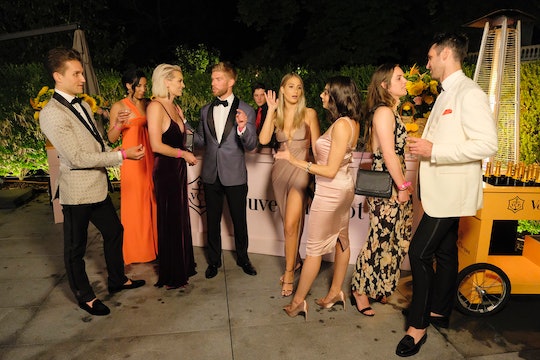 The cast of Bravo's Summer House bids adieu to their summertime home in the Season 3 finale, "Will You Bury Me?" The episode spins the end of the season into an especially macabre celebration when it airs on Jun. 3, but fans are surely hoping that this goodbye won't be as permanent as the episode title implies. Will there be a Season 4 of Summer House, or should you start mourning now?

Bravo hasn't officially announced the show's renewal yet, but that might not be reason to worry. It's rare for a network to confirm a new season when they've barely completed the most recent one. The good news could still be on its way, even if it hasn't reached the public yet. And it seems likely that Bravo will choose to continue with Summer House, because it already has three seasons. Bravo may have had their share of one hit wonders, but they typically stick with a show once they've found a formula that works.

But before a new summer can start, the previous one has to end. In the finale, the cast decide to host a funeral to pay their respects to the last few weeks, complete with all-black bikinis and a coffin hefted out onto the lawn. In a clip made available on Bravo's website, you can see the residents of Summer House mourn the tough times and say farewell to summer. For now, at least.

Each cast member revisits a memory or two by writing it on a scrap of paper before dropping it into the flamingo-patterned interior of the coffin. It reminds fans of all the drama that went down over the course of the season, but also allows the cast to put all those issues to bed. After they metaphorically bury the bad things, they'll be free to start fresh next time. That means Season 4 could see old disagreements laid to rest and new relationships blossoming — provided it does happen after all. It seems a little early to be speculating about the future of Summer House, but the end of Season 3 sets up a new beginning perfectly.

Season 4 could mean new couples, new antagonists, or even new cast members. There have been casting shakeups on Summer House before. Lauren and Ashley Wirkus left the show ahead of Season 3, as did Stephen McGee and Amit Neuman. But Paige DeSorbo, Hannah Berner, and Jordan Verroi helped fill the void, so there's no reason why fans wouldn't welcome any new addition that may join the festivities for Season 4. And since Kyle Cooke and Lindsay Hubbard have been there since the beginning, they would almost definitely stick with the show. Having an OG or two around is always helpful for stability. No matter how much the cast changes, you can count on them.

There's still a lot to look forward to before Summer House finishes up its third season, like Kyle Cooke and Amanda Batula's engagement. New episodes might not be a guarantee yet, but at least this season will go out in style.