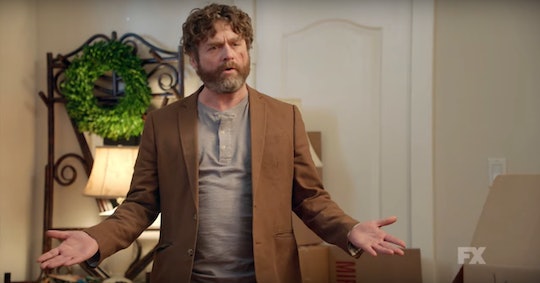 Is There Ever A Good Time For A Show Like 'Baskets' To End?

FX's half-hour dramedy Baskets has an unusual premise to say the least. But the show about a California rodeo clown has earned Louie Anderson an Emmy and is only in it fourth season. Some people may think it's just begun clowning around. So will there be a Season 5 of Baskets? Believe it or not, FX has decided it's time for the rodeo clown to hang up his red nose.

“Over four seasons, Baskets has taken its place among the great FX comedies as an endearing and hilarious look at the dreams and ambition of ‘Chip Baskets’ and his extended, loving family,” FX entertainment chief Eric Schrier said in a statement reported by TVLine. “This show has been a joy for everyone at FX and we are grateful to Jonathan Krisel, Zach Galifianakis, Louie Anderson, Martha Kelly and the rest of the cast and crew for giving us the gem that is Baskets.”

As for what to expect from the final season of the show, Anderson —who plays Chip and Dale's (Galifianakis) mom Christine — told The Hollywood Reporter in a video interview that Baskets Season 4 will have more warmth. "I think Zach [Galifianakis] finally likes me, and I don't mean that in a mean way," he said. "But I think Zach feels that I really am out to be his best interest as a mother and as a fellow actor."

Anderson told THR he truly takes the role to heart and feels like a mother to Galifianakis. But the role has forced him to think about the choices his own mom made. "Did my mom make the right choices or was she forced into making choices that kinda compromised who she wanted to be?" he contemplated. "Even now I get a little choked up thinking about how deep this season is."

Baskets might end with most characters discovering new paths for themselves. "...Chip has talked on the phone with his past love interest and it looks like Chip might be making some sort of olive branch to his ex-flame," Galifianakis said in the video interview about Season 4. "Dale finds a rebound girlfriend," Galifianakis continued, about the other twin he plays. "She's not really a good fit for the rest of the family, so Dale is heartbroken."

As for the other characters, Christine must balance moving in with her boyfriend Ken while also encouraging her adult sons to grow up. And Martha (Kelly) hires a life coach so she may become "less of a doormat" after finding out a man she's been seeing is married, according to Kelly in the video above. "I'm so proud of [Baskets] and I wish I could live in that world of Bakersfield Baskets with that family," said executive producer, writer, and director Jonathan Krisel in the video.

No matter how long a show is on the air for, every story has a natural end and the end for the Baskets cast has been full of laughter. Even though Baskets' life feels short, I'm happy it's ending on a high note.