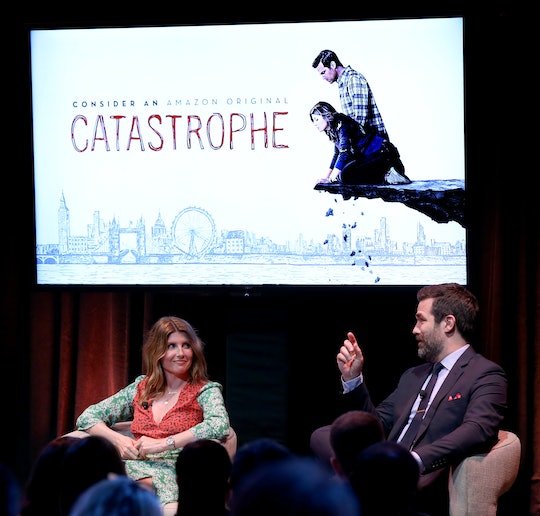 The worst part of finding the perfect series — the one that speaks to you on such a profound level — is when it ends for the season. Even worse — when it ends, period. One of the most underrated shows on Amazon Prime, Catastrophe, just ended its fourth season, which means fans are already clamoring for info on what's to come. Naturally, if you're to invest your feelings into this thing, it's important to know if there will be a Season 5 of Catastrophe. Because to go all in without a sure thing is to risk falling too hard for a show that won't love you in return.

If you're hoping that, by reading this, creators will magically produce a Season 5, I'm sorry to inform you that, no — Catastrophe's fourth season was its last, according to actress Sharon Horgan as reported by Entertainment.ie. "Sometimes I feel like it’s a good idea to quit while you’re ahead, I mean, we might not be ahead by the end of this season," she said. "It might go horribly wrong! The stories came to us really easily and we enjoyed writing it, I suppose we didn’t want to push that. We didn’t want to force stories." If nothing else, you have to respect a team that acknowledges the brilliance and decides to leave on an equally brilliant note instead of dragging it out, ruining it completely.

In case you aren't familiar with the far-too-short-lived British comedy series, it began in 2015 and follows the story of American dude, Rob, and an Irish woman, Sharon, who hook up over the course of a week, leaving Sharon pregnant. The story is ultimately about two people who barely know each other committing to stay together. Flash-forward to married life and kids and all the moments in between that prove far too relatable (also hilarious).

The show also showcased the beloved late Carrie Fisher, who played Rob's mother, Mia. Actor Rob Delaney said of working with Fisher, "Our theory with Carrie . . . we believe firmly — this isn’t a joke — that she agreed to do the show just because it shot in London." He later added, "We don’t think she watched the pilot or read the script . . . She literally learned what the show was well after it had already aired." If you're a fan of Fisher's work (hi, Star Wars), this sounds exactly like her and it's brilliant.

If you're already a fan of the series and are awaiting the March 15 premiere, prepare yourselves now for the ending that's already breaking the internet. Fear not — this is a spoil-free zone, but I suggest you engage in deep breathing exercises now, FYI. If you haven't caught on to, quite possibly, one of the best comedies about married life, you still have time to watch the previous three seasons to catch up on Amazon Prime.

Please disregard that Tweet caption as it'll only tempt you to Google the series finale. Don.t Do. It. If you want to feel utterly devastated in all the best ways, wait to watch it for yourself. Catastrophe had a wild ride, and it was good while it lasted. And, while there won't be a Season 5 to look forward to, you can safely tuck Sharon and Rob away in your mind, where they're perfect in their imperfections, forever. It's better this way. Trust me.

This article was originally published on March 14, 2019