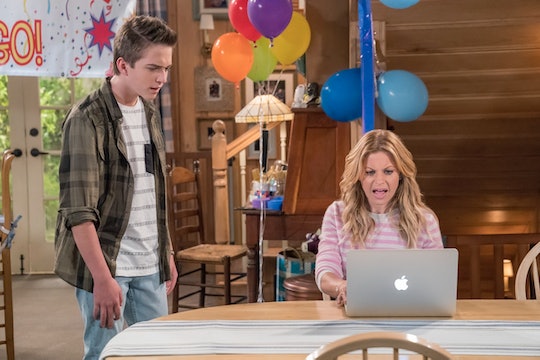 Season 5 Of 'Fuller House' Is Up For Debate & Fans Are Like, "Have Mercy"

With Season 4 of Fuller House now airing on Netflix, fans everywhere are gasping at rumors of possible cancellation. Say it ain't so, Netflix. Four seasons of the Tanner clan and the next generation simply isn't enough. Plus, with all the new happenings amongst them, fans need to know: Will there be a Season 5 of Fuller House? It's time to set the record straight.

At this point, there's no firm confirmation Netflix will pick up Fuller House for Season 5, but that also doesn't mean there won't be. In other words, it's too soon to know for sure. That's probably not the answer you want, but for now, you can indulge in Season 4's new episodes to tide you over until there is an answer. Candace Cameron Bure — who plays D.J. Fuller on the revived '90s show — recently spoke to E! News about the possibility of cancellation after Season 4 saying, "I don't know why or how that rumor got started. I think it was a slow news day and someone wanted to make more of it than it is." So that's neither a solid confirmation or denial which is totally fine (unless it's not renewed). Maybe the old adage "good things come to those who wait" should be applied here.

I wouldn't take too much stock in the fact that there isn't any "official" renewal talk yet. For all the other Fuller House seasons, no renewal announcement was made until the current season premiered. Back in October, word got around that the show would be done after Season 4, long before its premiere date. And though all episodes for Season 4 were shot over the course of the summer, a Netflix spokesperson told TV Line, "No decision has been made about the future of Fuller House; we’re looking forward to the premiere of Season 4 later this year."

And although Season 4 didn't get the exciting news until January of this year (which should tell you how much time passes before the announcement and a premiere date) Bure wanted to ease the fears of every Tanner fan, adding in the same interview, "I have no doubt that we're going to be back for Season 5."

Season 4 of Fuller House will reveal Danny (Bob Saget), Uncle Jesse (John Stamos), Aunt Becky (Lori Loughlin), and Joey (Dave Coulier) returning to the set as they venture back to good old San Francisco. At the end of Season 3, Stephanie got the news she had some embryos viable from IVF treatments — could that potentially mean triplets in the future Fuller house? Plus with Kimmy (Andrea Barber) as surrogate, it would only seem fitting that a Gibbler would carry three Tanners in her womb, right? I mean, that must be some kind of karmic energy happening, for sure.

While it's not known exactly when (or if) Fuller House will get picked up for Season 5, the chances are likely. The cast is behind it, and the fans are definitely behind it. Plus, the show's been nominated for an Emmy for Outstanding Children's Program. There really isn't much more reassurance I can give you until the announcement is official. For now, I'd say in terms of a Season 5? "You got it, dude."