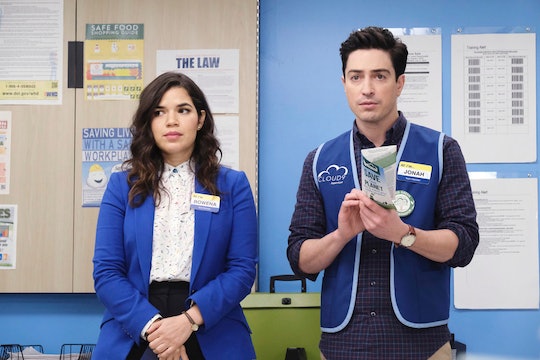 Fans Can't Wait To Spend Another Season At Their Favorite 'Superstore'

Season 4 of Superstore is coming to a close, and fans can’t wait to jump back into the fun with their favorite TV employees. After years of waiting for Amy and Jonah to get together, viewers finally got to see their relationship flourish this season, and they can’t wait to see what happens with them next. With so many lingering questions after the finale, many are wondering: will there be a Season 5 of Superstore?

Good news fans. Come this fall, you’ll get to spend another entire season with the employees of Cloud 9. As reported by Deadline, NBC renewed the series for Season 5 back in March. That's probably because Superstore has been doing well for the network in terms of ratings and buzz, pulling in second behind the NBC’s other popular sitcom, Brooklyn Nine-Nine.

According to The Hollywood Reporter, NBC executives Lisa Katz and Tracey Pakosta had nothing but praise for the series. "Week after week [Superstore creator] Justin Spitzer, our amazing writers, and cast and crew masterfully deliver a comedy that not only makes us laugh but speaks to the larger issues of the day," the co-presidents of scripted programming at NBC said in a statement.

But network executives aren’t the only ones excited about next season. In a recent interview with ET Canada, actor Ben Feldman, who plays Jonah, talked about how thrilled he was when he learned about the Season 5 renewal. “I was super excited [because] in today’s landscape, it’s insane to ever expect to get a back nine, to do a second half of a first season, or to get a pilot picked up,” he said. “So to make it all the way to Season 5 in this day and age is bananas. I was flabbergasted.”

On her Instagram page, America Ferrera, who plays Amy on the series, shared a photograph of the cast celebrating news of the renewal. “Season 5 pick up baby,” she wrote in the caption. “Superstore is coming back for more next season! Not done with us yet — So much good news for us and our fans!”

However, there is a major coming to Season 5. Series creator Justin Spitzer is stepping down, and he’s handing the show off to Superstore executive producers Gabe Miller and Jonathan Green. As reported by TV Line, Spitzer is working on a new series for Universal Television, but he feels good about leaving his show in the hands of his co-producers. “I’m excited to develop new projects with Pearlena and everyone else at Universal Television, which has been my home for the last 13 years,” Spitzer said in a statement. “Meanwhile, Gabe and Jonathan have been running Superstore with me from the beginning, and there’s no one I have more faith in to continue guiding it into the future.”

There is still no official date on when the series will return, but if it follows its schedule from the last few seasons, you could expect to see a Season 5 premiere in late September or early October.