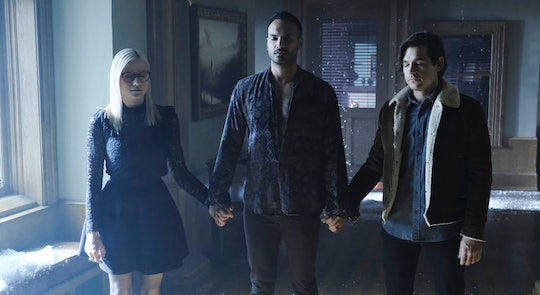 'The Magicians' May End Season 4 On A Cliffhanger

The Season 4 finale of The Magicians airs Apr. 17 on Syfy, but it seems impossible for every storyline to be neatly concluded in a single episode. The monstrous siblings inhabiting Eliot and Julia have only just begun their reign of terror and it's still unclear how to stop them. The Library still has a monopoly on magic. And everyone's relationships are pretty much a whole mess. If it doesn't get resolved tonight, will there be a Season 5 of The Magicians to tie up loose ends?

Thankfully, fans can rest easy: Syfy has already renewed the show for another season. Deadline announced the news the day before the Season 4 premiere, so new episodes have been a sure thing for some time already. Bill McGoldrick, the President of Scripted Content at NBCUniversal Cable Entertainment, was enthusiastic about the show upon its renewal, telling Deadline that it "raised the bar at Syfy and has gained momentum season after season, attracting a new audience to the channel." He went on to express how proud they were of the show "as it continues to break the boundaries of storytelling."

As amazing as it is to know another season is a guarantee, there is one teeny, tiny downside: it means Season 4 will almost certainly end with a cliffhanger.

But that's nothing new for the show. At the end of Season 1, Julia had absconded with the Beast, Penny lost his hands, and it looked like half the cast might be dead. In the Season 2 finale, all magic was lost and faeries were about to take over in Fillory. When Season 3 finished up, all the characters had their identities erased and replaced; to top it off, the Monster was on the loose in Eliot's body. The Magicians always sets up for the next season before the current one is done, which means "The Seam" might leave a lot unfinished.

Still, the show should be back with more of the same in Season 5. According to Deadline, executive producers and showrunners John McNamara and Sera Gamble said they "couldn't be happier or more excited to conjure another year of magic and all it entails — love, hate, loyalty, betrayal, sex, foul language, drugs, battling gods, monsters, and the most dangerous enemies of all: other human beings." They'll also be welcoming Henry Alonso Myers onto the showrunning team, though he's been an executive producer on the series since the first season.

A lot could go wrong in "The Seam." Trying to defeat the monsters while rescuing the people they've taken over will be a fine line to walk, and it's possible the mission won't be successful. But even if Quentin, Margo, Alice, Penny, Fen, and Kady manage to save their friends, they may not be able to put a stop to the Library. The complicated storylines that have dominated Season 4 may continue into the next season, whenever that is. So even though this season is ending, the narrative of The Magicians is still unfolding.