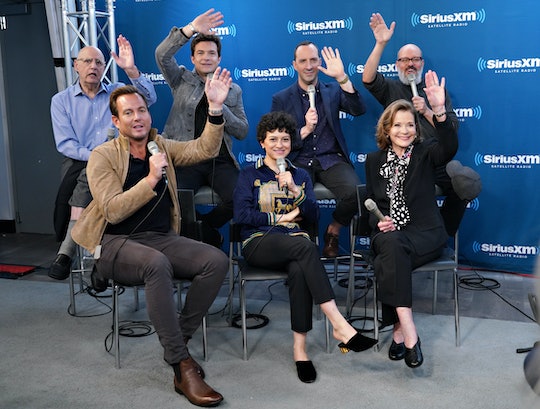 I hate to be the bearer of bad news, but for as long as fans awaited Arrested Development's return after a multi-year hiatus, Netflix may not be the saving grace it once was for the beloved series. The fifth season dove straight back into the wonderfully dysfunctional Bluth family, though the season was split into two parts amid multiple controversies that didn't exactly paint some cast members in the best light. With all of that, will there be a Season 6 of Arrested Development?

If you've been following the Arrested Development trail, you'll know that star David Cross claimed the season will not likely return. The series, which got its original start on Fox in '03, still hasn't been renewed — though, that may not be the final answer from Netflix. When Fox cancelled the show after three seasons fans were understandably devastated. Then, Netflix swooped in to revive it and brought back Season 4 a whole 10 years later, followed by Season 5. All seemed to head in the direction of another successful season — until it wasn't.

On an episode of Late Night With Seth Meyers Podcast, Cross said, "I’ve learned to say ‘Never say never,’ but I can’t see it happening again, I think for a number of reasons." In case you need a refresher on some of the reasons he's referring to, The New York Times conducted an interview last year with the cast, wherein Jessica Walter (who plays Lucille Bluth) accused costar, Jeffrey Tambor, of verbal harassment, which led to a slew on reactions and subsequent controversies. "I have to let go of being angry at him," Walter told the Times . "He never crossed the line on our show, with any, you know, sexual whatever. Verbally, yes, he harassed me, but he did apologize. I have to let it go."

That aside (and why this interview picked up so much steam), there are multiple sexual harassment allegations made against Jeffrey Tambor (George Bluth Sr.), including two women from the set of his Amazon series, Transparent (which led to him leaving the show). By this point, Season 5 of Arrested Development had already wrapped, so Tambor's appearance in the series was still a given, but many fans may not want to see Tambor on screen anymore and that's understandable.

TV Line reported that during the Television Critics Association press tour Netflix’s Vice President of original content, Cindy Holland, responded to questions about the return of Arrested Development with another season. She said, "I actually don’t know if [Season 6] is a possibility or not. We haven’t discussed it at all."

Again, there's no concrete answer, but it doesn't look good. In regards to that uncomfortable interview (when co-stars, Cross and Jason Bateman defended Tambor), apologies were issued, but it might've been too little, too late.

So for now, there are no plans for a Season 6 of Arrested Development. Once all eight episodes of Season 5 are fully out in the world and had time to simmer, who knows what could happen. Remember: a whole 10 years passed between Seasons 3 and 4, so if you're rooting for the Bluths, give it ten years and you might get lucky.