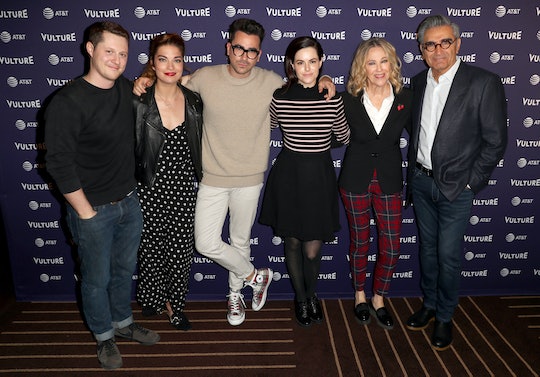 Father and son co-creators Eugene and Dan Levy announced the news on social media on Mar. 21. The statement read, in part:

We are so grateful to have been given the time and creative freedom to tell this story in its totality concluding with a final chapter that we have envisioned from the very beginning. It's not lost on us what a rare privilege it is in this industry to get to decide when your show will take its final bow.

Most endings are bittersweet — but this one is mostly sweet. Dan Levy told Esquire just how much the show means to him, “I’m excited for what’s to come, but I also care so deeply about this show, and I think so many times showrunners will set up a show and jump ship to work on something else,” he said. “I couldn’t imagine doing that with this show.”

Both Levy men recognize that the show benefits from the public's general desire to escape these days. “There needs to be some kind of correspondence between the clouds that are hanging over us over these past few years and people's desires to find and surround themselves with joy," Dan told Esquire. “I think what sitcoms have provided for people is consistency and a place where they can spend half an hour and just turn off.”

Even better, it looks like the creators of the show are as passionate about it as the fans. And while it's sad that the sixth season will be the show's final one, at least you can be sure that it will wrap up in its prime. Brad Schwartz, Head of Entertainment at Pop TV, told Vulture, "We are passionate enough about the show that we go about our jobs every day trying to do what’s best for the show, because what’s best for the show will ultimately be best for Pop.”

So don't be sad, Schitt's Creek fans. What's that saying? Stop and enjoy the Roses. Because when Season 6 airs on Pop TV in 2020, your favorite family is getting the ending they deserve. Or — I should say the ending Dan Levy has always wanted for them. But he doesn't seem out to break any hearts.