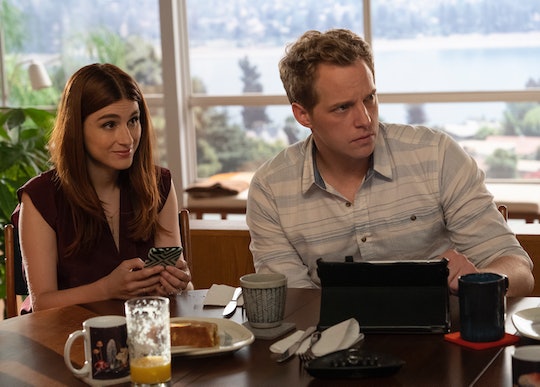 Jimmy & Gretchen May Get Married In 'You're The Worst' Season 5

The two worst people in Los Angeles may be walking down the aisle in Season 5 of FX's You're the Worst. The show has spent four seasons focusing on the extreme ups and downs of Jimmy and Gretchen's relationship as they finally figured out something that, weirdly, worked for them — even if everyone else recoiled in horror at their antics. But is their wedding the show's final goodbye? Will there be a Season 6 of You're the Worst?

Season 5 will be the final season of the show, as confirmed by creator Stephen Falk in an interview with TVLine. In the initial announcement for the fifth season, Nick Grad, the president of original programming at FX, said that it was a mutual decision between the network and the creatives to bring the show to a close this year. Falk later told TVLine that it was ultimately the network's choice and that he felt they probably could've done a sixth season.

However, everything worked out for the best in the end, with Falk saying that it felt right to end with Season 5. It gave them the opportunity to plan for their final 13 episodes and "really bring it to a close... this was a nice way to bring it home."

According to Falk, the final season would be all about commitment. While You're the Worst's lead romance was far from typical, it did follow the usual romantic beats: Jimmy and Gretchen have confessed their love, moved in together, broken up, and reunited, all in their own unique way. Now Season 5 will tackle how they feel about marriage, and how two people like Jimmy and Gretchen might approach the idea of making a lifelong commitment to each other.

In the process, the show will play around with its formula a little bit. When speaking to The Hollywood Reporter, Falk teased a satire of '90s romcoms in the season premiere (with a nod to 1999's Notting Hill). To TVLine, he promised something of an epilogue in the finale. "It doesn't end where it ends, in terms of linear time," Falk said. "In the finale, there's extra bonus information that I think is going to make a lot of people happy."

A trailer for Season 5 shows Jimmy and Gretchen planning for the big event. Gretchen tries on wedding gowns and decidedly feels nothing about it; they check out venues, and announce their decision to elope. But they also reach new depths of awfulness. Star Aya Cash told THR that something happens in Season 5 that made the cast feel the show "jumped the shark," though the decision (whatever it is) made sense as the episode continued. "We do something so heinous and deplorable that you think we can never come back from it," she said.

It sounds like You're the Worst will be true to itself until the very end. By combining brutal honesty, incredibly bad decisions, and strangely genuine romance, it has forged a new kind of love story. Now it has 13 episodes to find the perfect way to say goodbye.