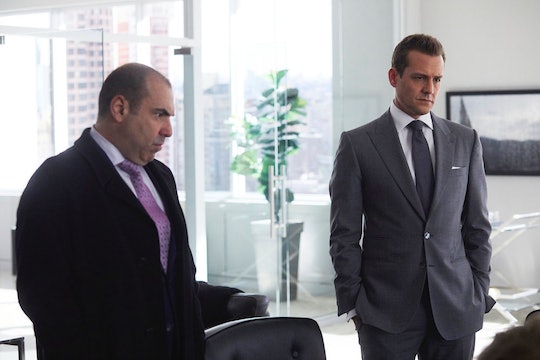 USA Network's legal drama Suits was popular long before anyone knew who lead actress Meghan Markle was dating. And it's only achieved royal status since then, with everyone speculating about whether the Duchess of Sussex will ever return as Rachel Zane. But will there be a Season 9 of Suits for her to return to?

To answer the latter question — yes, Suits will air a ninth and final season with a 10-episode order. In a statement announcing the news as reported by E! News, USA and SYFY Network president Chris McCumber said, "Suits has played an instrumental role in our network's DNA for nearly a decade," before thanking everyone involved in the shows production over the years, including showrunner Aaron Korsh, who had a lot of good things to say himself.

Korsh's (very long) statement about Suits' end began with a reflection on how he got his start. "Though I know it isn't true, it seems like only yesterday USA Network took a chance on an unestablished writer's very first hour long script. These days that's a common thing, but forty-seven years ago when I first wrote the 'Untitled Korsh Project,' nobody did it," he said, before expressing gratitude for everyone on the Suits team, the show's fans, and his family.

Though every TV show ending is bittersweet for both fans and actors, Season 9 does not mark the end of every Suits character's story. Gina Torres will continue her role as Jessica Pearson in the spinoff, Pearson. But there are a lot of changes in store for her.

Jessica moves from New York City to Chicago to begin a career in politics. All you need to do is turn on any national news station lately and it's pretty clear that the show has no lack of real-life drama to draw inspiration from. But the cast joining Torres is exciting too. One Tree Hill actress, Bethany Joy Lenz will play attorney Keri Allen, and judging from her Instagram post she can't wait!

"Still pinching myself that I'm part of the #suitsspinnoff..." she wrote, before praising fearless leader Torres. "[Torres] is a boss for real and I can't wait for you to see this show." Pearson will also feature Morgan Spector (Homeland) Simon Kassianides (Marvel’s Agents of S.H.I.E.L.D.) and Chantel Riley (Wynnona Earp) among others.

Suits still has plenty of story to tell, of course. But they'll be doing so without the Duchess of Sussex involved. When asked about the possibility of Markle's return to the show for the final season in January, Korch pretty much killed that dream for any fans still holding out hope. "We're not currently pursuing asking Meghan Markle to leave her position with the royal family and join us," he said at the TCAs. "I would love it but I think it's pretty close to zero."

I think that's a pretty good assumption. I mean, she's expecting a baby with Prince Harry. She's going to be pretty busy with her child, even if there were any chance that Queen Elizabeth would give her a royal reprieve to go film a show.

But by now, fans have met Rachel's (and Markle's) replacement Samantha Wheeler, played by Katherine Heigl and they know she's a strong woman worth watching in her own right. "She is not a delicate flower, and she is not hiding her aggression or her fierceness." Heigl told Harper's Bazaar about Korch's decision to introduce Samantha with a kickboxing scene. Heigl loved the show so much that when she learned it was getting a Season 8, she asked to be a part of it. So, I'm fairly certain Suits fans can count on Samantha Wheeler, at least, until the end.