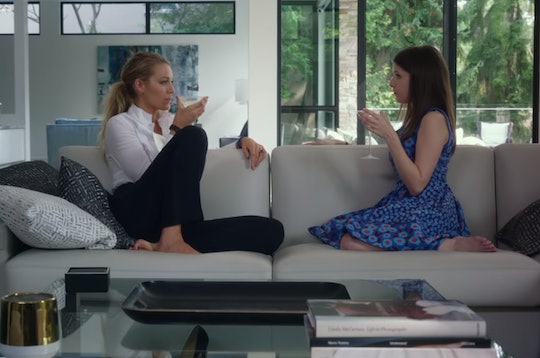 Will There Be A Sequel To 'A Simple Favor'? People Can't Get Enough Of The Thriller Film

As The Hangover 2 proved, pretty much any movie can be made into a sequel — but not all of them should. But when a movie is doing so well at the theater, and audiences are responding, it’s natural to wonder if it’s going to produce an heir. So some fans are now probably wondering if there will be a sequel to A Simple Favor? The question might be... should there be?

Now, that’s not a question that can be answered without some spoilers, so if you haven’t seen the movie yet, you’ve now been warned and stop reading right now if you still haven't seen the film and don't want to know what happened.

OK, so let's get into it. The movie centers on the friendship between a mommy vlogger named Stephanie, played by Anna Kendrick, and a high-powered PR exec named Emily who disappears, played by Blake Lively, according to Vanity Fair. At first, it appears to be a straightforward whodunit mystery, but thanks to some sleuthing by Stephanie the audience soon learns things aren’t always what they appear. By the end, one person is in jail, one person is successful, and one is struggling to rebuild their life, as Vanity Fair reported. Seems to be wrapped up pretty neatly, so why delve into a sequel?

One reason might be if the cast has great chemistry and audiences just want more and that might be the case for A Simple Favor. The New Yorker, in a tepid review of the film overall, wrote that “the performances by Anna Kendrick and Blake lively […] are so invigorating, so generous with pointed inflections and snappy gestures that they fill the movie’s good-humored, amply plotted emptiness.” The reviewer goes on to say that the two leads are able to cover for everything else that might be missing and offer a “satisfying illusion of fullness.”

That’s pretty high praise and might be the kind of response the studio needs to generate another outing for the two actresses.

Another good reason for a sequel might be if the story warrants it. Were there questions left hanging? Was the audience introduced to minor characters who might make a good lens through which to come back to this group of people or place? This one is a little harder to explore for A Simple Favor because the basic premise of the movie —  what happened to Emily, according to The Mirror — is answered.

However, when the film ends at least two of the three main characters are embarking on new journeys and their past experiences are going to affect how they approach this, as noted by The Mirror. Will they flourish or fold? Those might be ideas worth exploring as the characters move into their new lives.

But Hollywood is largely money-driven and what ultimately seems to drive sequels is often the reaction from audiences. Do they love a movie enough to pay to see it again and make it a big box-office smash? Barring that, do they love it enough to recommend it in person or on social media?

A Simple Favor has only been out for two weeks and has grossed about $45 million, against a budget of about $20 million, according to Box Office Mojo. That seems to be a decent enough haul for a comedy-thriller; maybe even enough to get a sequel greenlit. Perhaps more importantly, the movie is getting pretty strong reviews where it counts — on social media:

Ultimately, there’s a delicate dance of actors, writers, and executives that has to come together to get any movie produced, but in the case of one that’s a hit, those wheels seem to turn a little more quickly.

So, will we see these characters back again for A Simple Favor 2: A Complex Request? Though nothing has officially been announced, my bet is on yes.