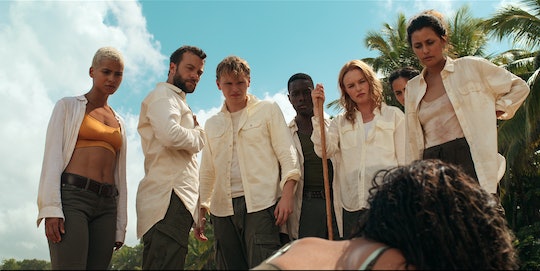 Netflix's 'The I-Land' Probably Won't Be Back For Season 2

Netflix's The I-Land brings together all the survivalist intrigue of Lost with the unnerving techno-dystopia of Black Mirror, and fans who couldn't get enough of the first season may be wondering if there will be a The I-Land Season 2. As of right now, the show is billed as a seven-part miniseries, which suggests that The I-Land is a complete story as is. But as TV viewers have seen in recent years, anything can happen — even with so-called miniseries — if a show picks up enough traction.

HBO's Big Little Lies was intended to be a limited series based on a book, and then the show became such a cultural juggernaut that its stars commissioned author Liane Moriarty to pen a sequel novella on which to base a second season, according to Nicole Kidman's Vanity Fair profile. Hulu's The Handmaid's Tale met a similar fate when, after the first season covered the events of Margaret Atwood's 1985 novel, Hulu decided to extend the series into four seasons and counting with original storylines. Just this month, Atwood released a sequel novel titled The Testaments, which Hulu is already developing into a followup series, according to Deadline.

As of right now, Netflix intends for The I-Land's seven released episodes to serve as a complete series. Considering the show's massive budget — it shot on location in the Dominican Republic, with the first season costing $14 million, according to local newspaper Diario Libre — I think it's safe to say Netflix went all out on the miniseries.

Playwright Neil LaBute serves as the show's creator, showrunner, and executive producer, according to Vulture, having written much of the series alongside Lucy Teitler, as well. LaBute also created and showruns SyFy's Van Helsing, and has a slew of film and TV writing and directing credits to his name, many of which are adaptations of his stage work. Given his playwriting background, my guess is that he, too, intended for the miniseries to be a standalone story, which is another hint that a followup season may be unlikely, even if The I-Land is well-received.

The show follows a group of ten castaways with Instagram model good looks who wake up stranded on a beautiful island with no recollection of who they are or how they got there. As the series unfolds, viewers learn the island is actually a simulation and the dangerous gameplay it involves has potentially deadly real-world consequences. Morality and survival clash in the castaways' Hunger Games-esque race to find a way off the island and back to themselves.

Kate Bosworth, who both stars in the series and serves as a producer, told the New York Post The I-Land is an exploration of "nature versus nurture" and what happens when people's instinct for survival kicks in. There's also a creepy surveillance storyline as viewers learn the players in the game are being watched by a group of people seemingly controlling the game. It serves as a very Westworld-ian twist on a series with a lot to say about technology, social media, and influencer culture.

The I-Land is now streaming on Netflix.